The Heartland: An American History (Hardcover) 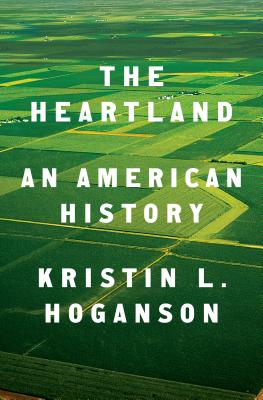 The Heartland: An American History (Hardcover)


Email or call for price.
A history of a quintessentially American place--the rural and small town heartland--that uncovers deep yet hidden currents of connection with the world.

When Kristin L. Hoganson arrived in Champaign, Illinois, after teaching at Harvard, studying at Yale, and living in the D.C. metro area with various stints overseas, she expected to find her new home, well, isolated. Even provincial. After all, she had landed in the American heartland, a place where the nation's identity exists in its pristine form. Or so we have been taught to believe. Struck by the gap between reputation and reality, she determined to get to the bottom of history and myth. The deeper she dug into the making of the modern heartland, the wider her story became as she realized that she'd uncovered an unheralded crossroads of people, commerce, and ideas. But the really interesting thing, Hoganson found, was that over the course of American history, even as the region's connections with the rest of the planet became increasingly dense and intricate, the idea of the rural Midwest as a steadfast heartland became a stronger and more stubbornly immovable myth. In enshrining a symbolic heart, the American people have repressed the kinds of stories that Hoganson tells, of sweeping breadth and depth and soul.

In The Heartland, Kristin L. Hoganson drills deep into the center of the country, only to find a global story in the resulting core sample. Deftly navigating the disconnect between history and myth, she tracks both the backstory of this region and the evolution of the idea of an unalloyed heart at the center of the land. A provocative and highly original work of historical scholarship, The Heartland speaks volumes about pressing preoccupations, among them identity and community, immigration and trade, and security and global power. And food. To read it is to be inoculated against using the word "heartland" unironically ever again.
Kristin L. Hoganson is the Stanley S. Stroup Professor of United States History at the University of Illinois, Urbana-Champaign. She is the author of Consumers' Imperium: The Global Production of American Domesticity, 1865-1920; American Empire at the Turn of the Twentieth Century; and Fighting for American Manhood: How Gender Politics Provoked the Spanish-American and Philippine-American Wars. Having lived in central Illinois longer than any other place, she now calls the prairie home.
One of NPR's Best Books of 2019

“Fascinating and convincing . . . Hoganson is a marvelous writer. . . . [a] considerable achievement.” —The Wall Street Journal

“An original contribution to the history of the region . . . in conversation with our contemporary moment.” —The New York Times Book Review

“[Hoganson is] clear and entertaining . . . [a] deeply researched book that will remain useful and readable long after the election cycle during which it's being published.” –NPR.org

“Well-illustrated and thoroughly researched . . . pleasingly provocative . . . Those inclined to take the Midwest for granted will think differently about it after browsing through this book.” –The Columbus Dispatch

“Awash in interesting and fresh information.” —The Minneapolis Star Tribune

“[A] sophisticated, complex work. . . . Deeply researched with a well-proven argument, [The Heartland] will attract many scholars as well as general readers who like innovative, challenging history.” —Publishers Weekly, starred review

“A revelatory examination . . . [A] brilliantly reasoned, meticulously researched book, which refreshingly pushes against stereotypes at every turn. . . . With lively prose, Hoganson delivers an eye-opening, outside-the-box book that is mind-bending in all the right ways.” —Kirkus, starred review

“As broad and wide as the prairie itself, The Heartland challenges both national and global histories by proposing a whole new way of thinking about the nature of place. The heartland isn’t the isolated homeland of American myth, Hoganson argues; it’s a site of circulation, experiment, and renewal.” —Jill Lepore, author of These Truths: A History of the United States

“Kristin Hoganson paints an original and surprising portrait of the Midwest: international in every respect, from its peoples and its animals to its politics and its economics. The Heartland is a compelling history that forces us to rethink the global and the cosmopolitan, the regional and the particular.” —Andrew Zimmerman, George Washington University

"In this brilliant and entirely original telling, Kristin Hoganson shows us the Midwest is not the tidy isolationist bastion of white picket fence Americana that informs still prevailing myths of the region as forgettable flyover country.  Through a series of deft and often surprising portraits of Native Americans and the coming of settler colonialism, the changing natural environment and the place of the region in the rise of American empire, she makes clear the heartland’s remarkable heterogeneity along with the global forces that gave its lands and peoples shape and form.  A transformative reconsideration of the Midwest and its place in the American story, The Heartland is a luminous work by a master historian at the very top of her game." —Mark Philip Bradley, The University of Chicago

“Kristin Hoganson masterfully unpacks the myth of the American heartland, demonstrating that this geographic region has never stood in static isolation. The Heartland makes critical interventions in the study of empire, settler-colonialism, borderlands, and food systems. From swampland to pastoral landscape, this uneasy symbol of nativism in American politics must be understood in a global context.” —Mireya Loza, New York University, author of Defiant Braceros