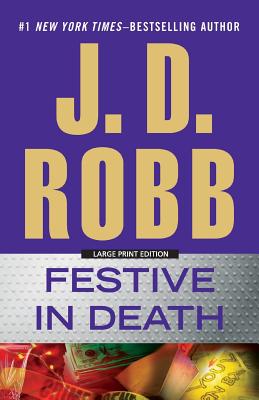 
Email or call for price.
Eve Dallas deals with a homicide--and the holiday season--in the latest from #1 "New York Times" bestselling author J.D. Robb.
Personal trainer Trey Ziegler was in peak physical condition. If you didn't count the kitchen knife in his well-toned chest.
Lieutenant Eve Dallas soon discovers a lineup of women who were loved and left by the narcissistic gym rat. While Dallas sorts through the list of Ziegler's enemies, she's also dealing with her Christmas shopping list--plus the guest list for her and her billionaire husband's upcoming holiday bash.
Feeling less than festive, Dallas tries to put aside her distaste for the victim and solve the mystery of his death. There are just a few investigating days left before Christmas, and as New Year's 2061 approaches, this homicide cop is resolved to stop a cold-blooded killer.

J. D. Robb is the pseudonym for the number one "New York Times" bestselling author of more than 200 novels, including the futuristic suspense In Death series. Recent titles include" Concealed in Death," "Thankless in Death," "Calculated in Death," and "Delusion in Death." There are more than 400 million copies of the author's books in print.