How the World Works (Paperback) 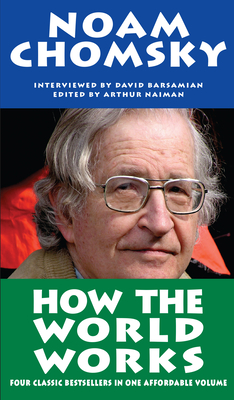 How the World Works (Paperback)


Usually Ships in 3-7 Days
An eye-opening introduction to the timelessly relevant ideas of Noam Chomsky, this book is a penetrating, illusion-shattering look at how things really work from the man The New York Times called “arguably the most important intellectual alive.”

Offering something not found anywhere else: How the World Works is pure Chomsky, but tailored for those unfamiliar to his work. Made up of meticulously edited speeches and interviews, every dazzling idea and penetrating insight is kept intact and delivered in clear, accessible, reader-friendly prose.

And they continue to sell year after year after year because Chomsky’s ideas become, if anything, more relevant as time goes by. For example, it was decades ago when he pointed out that “in 1970, about 90% of international capital was used for trade and long-term investment—more or less productive things—and 10% for speculation. By 1990, those figures had reversed.” As we know, high-risk speculation continues to increase exponentially as corporations continue to push the free market economy—but only for the power they offer to the wealthy, not to benefit all people. We’re paying the price now for not heeding him them.
Noam Chomsky is the most famous social critic in the world. Lionized abroad, his ideas are marginalized here—except in linguistics, where they’ve revolutionized the field. According to MIT and the Chicago Tribune, he’s the most cited author in the last two decades and is the eighth most cited source of all time (only surpasssed by Marx, Lenin, Shakespeare, Aristotle, the Bible, Plato, and Freud). Born in 1928, he’s taught at MIT for more than 50 years.

David Barsamian is an Armenian-American radio broadcaster, writer, and the founder and director of Alternative Radio, a Colorado-based syndicated weekly public affairs program.

Arthur Naiman wrote, co-authored, edited, designed and/or published more than thirty nonfiction books. In each of those categories, his books have sold over a million copies.