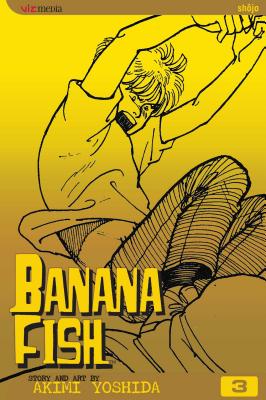 This is book number 3 in the Banana Fish series.

Nature made Ash beautiful; Nurture made him a killer!

Nature made Ash Lynx beautiful; nurture made him a cold ruthless killer. A runaway brought up as the adopted heir and sex toy of  “Papa” Dino Golzine, Ash, now at the rebellious age of seventeen, forsakes the kingdom held out by the devil who raised him. But the hideous secret that drove Ash's older brother mad in Vietnam has suddenly fallen into Papa's insatiably ambitious hands--and it's exactly the wrong time for Eiji Okamura, a pure-hearted young photographer from Japan, to make Ash Lynx's acquaintance... Epic in scope, and one of the best-selling shojo titles of all time in Japan, Akimi Yoshida put an electric shock into the genre and gained a huge crossover audience through Banana Fish's stripped-down, non-stop style.

The idea that Ash Lynx would be more controllable in jail has worked out for nobody, because in between gang rape and random assaults, Ash has not only managed to get Eiji to carry out info to his allies in Chinatown, but he's met cellmate Max Lobo, another survivor of his brother's unit in Vietnam. That means as soon as Ash makes bail, he's only headed for bigger trouble. But what's more dangerous for him, confronting Papa Dino or his real father...?
Akimi Yoshida made her manga debut in 1977 with the college manga story her college story, A SLIGHTLY STRANGE NEIGHBOR. Her immensely popular series BANANA FISH, her longest work to date, ran from 1985 to 1994 and made her a superstar in the shojo manga world, injecting a new realism and narrative energy into the genre and attracting a large male crossover readership. Yoshida was honored twice with the top annual prize for excellence in shojo from Japanese publishing giant, Shogakukan.