The Pivot of Civilization (Classics in Women's Studies) (Paperback) 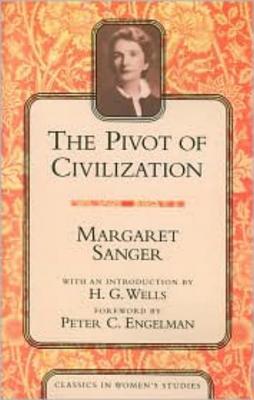 The Pivot of Civilization (Classics in Women's Studies) (Paperback)

Out of Print
Arguably her most important and influential book, this controversial work, first published in 1922 by pioneering birth-control advocate Margaret Sanger, attempted to broaden the still-radical idea of birth control beyond its socialist and feminist roots. Moving away from a single-minded focus on women's reproductive rights to the larger issue of the general health and economic prosperity of the whole human race, Sanger argued that birth control was pivotal to a rational approach toward dealing with the threat of overpopulation and its ruinous consequences in poverty and disease. Through this book Sanger hoped to persuade the medical establishment to assume control over contraceptive distribution, and thereby to lessen the religious, legal, and moral opposition that continued to restrict access to contraceptive information.

However important this book is to the history of women's rights, it remains a very problematic work from our more scientifically informed perspective today. In arguing for population control Sanger made frequent reference to the then fashionable "science" of eugenics. She also adopted its rhetoric, using such callous phrases as "the feeble-minded" and the "unfit" and advocating birth control as a means of limiting the breeding of "defectives, delinquents and dependents." Although she incorporated views and terminology commonly held in respectable medical and scientific circles of the day, Sanger's writings on eugenics, and this book in particular, have become fodder for her critics both on the left and the right, who seek to diminish her achievements and obscure what is ultimately a powerful feminist message: when women gain greater control over their fertility, they will improve the human race.

This unusual and historically significant book is complemented by a thoughtful and informative introduction by Peter C. Engelman, assistant editor of The Margaret Sanger Papers Project, who provides much insight by placing this work in the context of the age and Sanger's life.
Margaret Sanger (1879-1966) was the American founder of the birth control movement. A trained nurse, she founded the first birth control clinic in the United States (in Brooklyn, NY), and she organized the first American Birth Control Conference in New York as well as the first World Population Conference in Geneva, Switzerland. She was also the first president of the International Planned Parenthood Federation. Among her other books are What Every Mother Should Know (1917), My Fight for Birth Control (1931), and Margaret Sanger: An Autobiography (1938).