When the Birds Stopped Singing: Life in Ramallah Under Siege (Paperback) 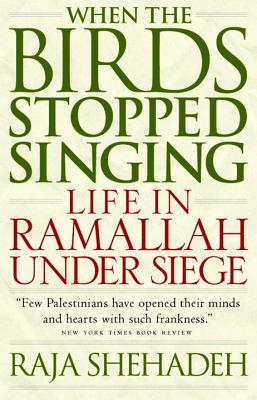 By Raja Shehadeh
Email or call for price
Out of Print

The Israeli army invaded Ramallah in March 2002. A tank stood at the end of Raja Shehadeh's road; Israeli soldiers patrolled from the roof toops. Four soldiers took over his brother's apartment and then used him as a human shield as they went through the building, while his wife tried to keep her composure for the sake of their frightened childred, ages four and six.
This is an account of what it is like to be under seige: the terror, the frustrations, the humiliations, and the rage. How do you pass your time when you are imprisoned in your own home? What do you do when you cannot cross the neighborhood to help your sick mother?
Shehadeh's recent memoir, Strangers in the House: Coming of Age in Occupied Palestine, was the first book by a Palestinian writer to chronicle a life of displacement on the West Bank from 1967 to the present. It received international acclaim and was a finalist for the 2002 Lionel Gelber Prize. When the Birds Stopped Singing is a book of the moment, a chronicle of life today as lived by ordinary Palestinians throughout the West Bank and Gaza in the grip of the most stringent Israeli security measures in years. And yet it is also an enduring document, at once literary and of great political import, that should serve as a cautionary tale for today's and future generations.

Raja Shehadeh is a Palestinian lawyer and writer who lives in Ramallah. He is a founder of Al-Haq, a pioneering, nonpartisan human rights organization, and the author of several books about international law, human rights, and the Middle East.

"This short, powerful book should be required reading for anyone who has ever wondered what it's like to be an ordinary citizen living in a war zone." — Publishers Weekly

"Shehadeh's voice is a rare one... angry yet dispassionate, comitted yet free." -- Michael Ignatieff

"Shehadeh captures the rage and despair of lives stunted by occupation." -- Washington Post


"An intimate view of living under curfew, listening to gunfire and explosions, detouring around troops and roadblocks, and having one's home searched or damaged. . . . Shehadeh is indignantly critical of Israel and does not much praise Palestinian leadership. Tragically jammed between the two are the aspirations and humiliations of nonmilitant Palestinians, which the author ably expresses." — Booklist