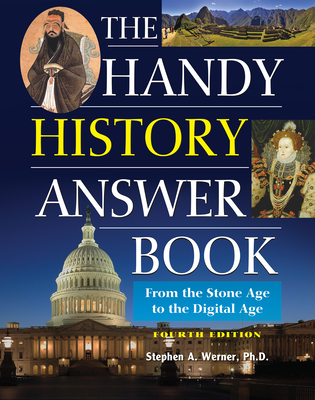 By Stephen A. Werner


Usually Ships in 3-7 Days
From the Origin of Humans to Today ... All in One Volume Highlights. Low lights. The twists and turns of social, political, and cultural history gathered in one fun and fascinating title The Handy History Answer Book: From the Stone Age to the Digital Age takes a riveting walk through the ages, looking at the most important events of the past 5,000 years, including wars, disasters, pandemics, births, lives, and more. It supplies context to the past with a wealth of information on invention, philosophy, science, politics, culture, sports, business, law, media, and religion.

A concise guide to all things historical, this feast of facts and compelling stories recounts the revolutionary ideas, acts, and inventions that changed the world. It surveys significant people, times, and events worldwide, with a special focus on U.S. history from its beginnings to the present. Fully revised and updated, this new edition of The Handy History Answer Book answers over 1,600 of the most frequently asked, most interesting, and unusual history questions, including ... What was the Stone Age? Why was Julius Caesar murdered? What are the origins of the religion of Islam? Why is the COVID-19 pandemic so significant? Why is the shamrock the symbol of St. Patrick? What is the legacy of the Crusades today? What are England's royal "houses"? Did Marie Antoinette really say, "Let them eat cake"? When did people first migrate to North America? Who are the Cajuns? What is the Hubble Space Telescope? What were the first political parties in the United States? Who was Black Elk? When did chain stores first appear? Were the Nazi's socialists? How long have hurricanes been given names? Who was Typhoid Mary? What happened at Pearl Harbor? What was the Bataan Death March? What is NATO? What is habeas corpus? Who was Emmett Till? Who was Genghis Khan? What was the triangular trade? Who is called the "Father of the Interstate System"? Who is Bernie Madoff? Who were the Wobblies? What was the Beat movement? Who is Ralph Nader What is the Occupy movement? What is the strongest earthquake ever measured? What happened on Apollo 13? What is Gray's Anatomy? What is origin of Listerine(R)? What is the problem with antibiotics today? Who developed the first MRI machine? How does it work? What are the Ivy League colleges? Who were the Brothers Grimm? Why does the Leaning Tower of Pisa lean? What was the Motion Picture Production Code? Which entertainers were in the Rat Pack? Who wrote the first computer program? What is unique about the Trump presidency?

If "History doesn't repeat itself but it often rhymes" (as Mark Twain is reputed to have said) then The Handy History Answer Book is a lyrical and poetic treat. Clear, concise, and straightforward, this informative primer is a resource for brushing up on the events, terms, and history-makers many of us remember from school but can't completely recall. Wide-ranging and comprehensive with nearly 250 illustrations, this information-rich tome also includes a helpful bibliography and an extensive index, adding to its usefulness. A perfect companion for history buffs of all ages.

Stephen A. Werner, Ph.D. received his doctorate in Historical Study of Christian Theology from Saint Louis University. He has nearly 30 years of experience teaching humanities courses at several universities in the St. Louis area. Along with courses on human culture and history, mythology, and religious history; he has taught American culture classes, covering such figures as Frank Sinatra and Elvis Presley. His previous books include The Handy Christianity Answer Book and How to Study Religion, which provides an introduction to religion for college students or for those who are curious about religion. His other writings focus on American religious history in the 20th century. Werner is also the writer of plays, musicals, and an opera. His song "Irish Farewell" has been popular on YouTube. He resides in St. Louis, Missouri.