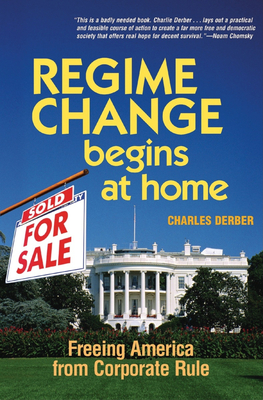 
Email or call for price.
Since 1980, America has been run by a corporate regime that has co-opted both political parties and shifted sovereignty from "we the people" to trans-national corporations. The result has been job insecurity for millions of workers, debts as far as the eye can see, and a dangerous quest for global domination. Democracy itself has been undermined and the Constitution weakened. This regime must be overturned! And, as Charles Derber demonstrates in his provocative book, it can be. After all, Derber points out, there have been other corporate regimes in American history, although this latest version is by far the most extreme. Still, the corporate regimes of the Gilded Age and Roaring Twenties were overturned. To create regime change again, it will require bold, creative strategies, uniting progressives and conservatives in a new politics, which Derber outlines in detail.

Regime Change Begins at Home exposes the many lies the corporate regime has used to maintain itself throughout its history, from the Cold War to the Iraq war, with a particular emphasis on how the Bush administration has cynically sought to, as Condelezza Rice once put it, "capitalize on the opportunities" presented by 9/11. Derber reveals how the Bush administration has used the so-called "war on terror" to frighten and distract the public. But regime change is possible. In Part III, Derber lays out the vision of a new regime, describing the social movements now fighting to achieve it, and the major new political realignment-one spanning the traditional conservative-liberal divide-that can make it happen. Derber does not minimize the difficulty of the task ahead, but he offers hope and specific, sophisticated, often surprising advice for defeating the regime and returning America to its citizens.
Charles Derber is Professor of Sociology at Boston College and former director of its graduate program on Social Economy and Social Justice. Derber received his undergraduate degree at Yale University and his PhD at the University of Chicago. He is a scholar in the field of political economy, international relations, and society, with eight internationally acclaimed books and major research grants from the U.S. Department of Education and the National Institutes of Mental Health.
Derber’s books have been reviewed by The New York Times, The Washington Post, The Boston Globe, The Boston Herald, The Washington Monthly, and other publications. His op-eds and essays appear in Newsday, The Boston Globe, and Tikkun, and he is interviewed frequently by Newsweek, Business Week, Time, Bloomberg, and The L.A. Times for stories about business and politics.

"Writing in a punchy, buoyant style, with sidebars on "Corporate Superpowers" and profiles of downsized workers, Derber mixes classic populist motifs from Ralph Nader, Michael Moore and Hegel: the co-optation of the state by monied interests, the corruption and sameness of politicians, nostalgia for a now-trampled Constitution, and an oppressive sense that our lives are being marketed to us."—Publishers Weekly