I'm with the Band: Confessions of a Groupie (Paperback) 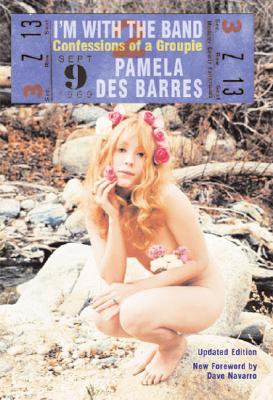 I'm with the Band: Confessions of a Groupie (Paperback)


Usually Ships in 3-7 Days
The stylish, exuberant, and remarkably sweet confession of one of the most famous groupies of the 1960s and 70s is back in print in this new edition that includes an afterword on the author's last 15 years of adventures. As soon as she graduated from high school, Pamela Des Barres headed for the Sunset Strip, where she knocked on rock stars' backstage doors and immersed herself in the drugs, danger, and ecstasy of the freewheeling 1960s. Over the next 10 years she had affairs with Mick Jagger, Jimmy Page, Keith Moon, Waylon Jennings, Chris Hillman, Noel Redding, and Jim Morrison, among others. She traveled with Led Zeppelin; lived in sin with Don Johnson; turned down a date with Elvis Presley; and was close friends with Robert Plant, Gram Parsons, Ray Davies, and Frank Zappa. As a member of the GTO's, a girl group masterminded by Frank Zappa, she was in the thick of the most revolutionary renaissance in the history of modern popular music. Warm, witty, and sexy, this kiss-and-tell–all stands out as the perfect chronicle of one of rock 'n' roll's most thrilling eras.

Pamela Des Barres is the author of Let's Spend the Night Together and Take Another Little Piece of My Heart. A spokesperson for her generation, she is an authority on classic rock and the freewheelin' rock 'n' roll lifestyle. She has written for the New York Times, Rolling Stone, Cosmopolitan, and many other magazines.

"She charms me every time she refuses to regret. And she regrets nothing."  —Los Angeles Times

"Should spur enough interest...that...her story can be made into the movie it needs to be."  —The WOW Report

"Granted it's gossipy, but it's also a worthwhile document of the blossoming of an innocent California flower-child."  —Star Tribune

"Eminently readable, offering all the fun of a trashy read without resorting to sensationalism or mean-spiritedness." —North Bay Bohemian

"A must-read for all lovers of great music and men."  —Playgirl