Zeus Is A Dick (Hardcover) 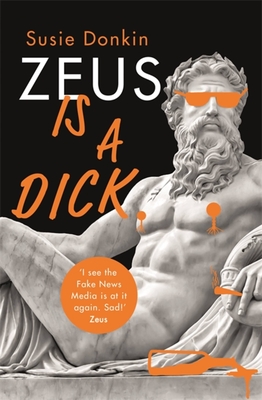 In the beginning, everything was fine.* And then along came Zeus.

Ahh Greek myths. Those glorious tales of heroism, honour and... petty squabbles, soap-opera drama and more weird sex than Fifty Shades of Grey could shake a stick at!

It's about time we stopped respecting myths and started laughing at them. Did you know Aphrodite, goddess of love and beauty, was born of some discarded genitals? Or that Hera threw her own son off a mountain because he was ugly? Or that Apollo once kidnapped a boat full of people while pretending to be a dolphin?

And let's not even get started on Zeus - king of the gods, ruler of the skies and a man who's never heard of self-control. In fact, if there's one thing most Greek myths have in common, it's that all the drama could have been avoided if SOMEONE could keep it in their toga...

Horrible Histories writer Susie Donkin takes us on a hilarious romp through mythology and the many times the gods (literally) screwed everything up! Stephen Fry's Mythos by way of Drunk History, Zeus is a Dick is perfect for those who like their myths with a heavy dollop of satire.

'Who knew mythology was so bonkers? I am grateful - it had me laughing from the first page to the last.' - Miranda Hart

'It's about time someone called him out on all this' - Hera, goddess of marriage, wife of Zeus

'Worst. Father. Ever.' - Artemis, goddess of the hunt, daughter of Zeus

'Oh yeah, focus on him. I never did anything wrong. Nothing to see here' - Poseidon, god of the seas, brother of Zeus

Susie Donkin has been a writer for the hugely popular Horrible Histories (CBBC) since it first aired in 2009. Now in its 9th series it was won a variety of awards including Best Writing Team and Best Comedy Show at the Children's BAFTAs. Other writing credits include the award-winning Smack The Pony (Channel 4), and Bearded Ladies (Radio 4, BBC2). As Artistic Director of Spitz & Co she has created three successful rural touring comedy shows all of which have toured extensively throughout the UK.