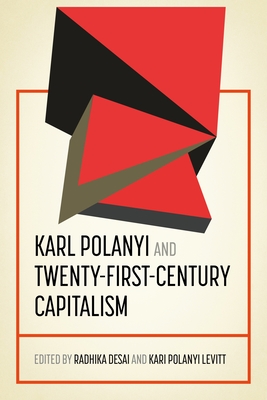 As far right movements, social disintegration and international conflict emerge from the decay of the neoliberal order, Karl Polanyi's warnings against the unbridled domination of markets, is ever more relevant.

The essays in Karl Polanyi for the 21st Century extend the boundaries of our understanding of Polanyi's life and work. They will interest Polanyi scholars and all interested in socialism and our future after neoliberalism. One asks whether, following Keynes and Hayek, Polanyi's ideas will shape the twenty-first century. Some clarify, for the meaning of money as a fictitious commodity. Others resolve difficulties in understanding the building blocks of Polanyi's thought: fictitious commodities, the double movement, the United States' exceptional development, the reality of society, and socialism as freedom in a complex society. And yes others explore how Polanyi sheds light on income inequality, world systems theory, comparative political economy.
Radhika Desai is Professor at the Department of Political Studies at the University of Manitoba Kari Polanyi Levitt is Honorary President of the Karl Polanyi Institute of Political Economy at Concordia University