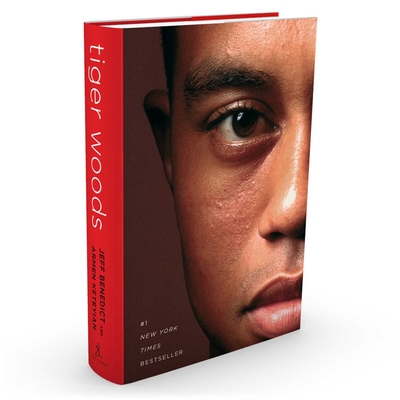 
Email or call for price.
The #1 New York Times bestseller based on years of reporting and interviews with more than 250 people from every corner of Tiger Woods’s life—this “comprehensive, propulsive…and unsparing” (The New Yorker) biography is “an ambitious 360-degree portrait of golf’s most scrutinized figure…brimming with revealing details” (Golf Digest).

In 2009, Tiger Woods was the most famous athlete on the planet, a transcendent star of almost unfathomable fame and fortune living what appeared to be the perfect life. But it turned out he had been living a double life for years—one that exploded in the aftermath of a Thanksgiving night crash that exposed his serial infidelity and sent his personal and professional lives over a cliff. In this “searing biography of golf’s most blazing talent” (GOLF magazine), Jeff Benedict and Armen Keteyian dig deep behind the headlines to produce a richly reported answer to the question that has mystified millions of sports fans for nearly a decade: who is Tiger Woods, really?

Drawing on more than four hundred interviews with people from every corner of Woods’s life—many of whom have never spoken about him on the record before—Benedict and Keteyian construct a captivating psychological profile of a mixed race child programmed by an attention-grabbing father and the original Tiger Mom to be the “chosen one,” to change not just the game of golf, but the world as well. But at what cost? Benedict and Keteyian provide the starling answers in this definitive biography that is destined to linger in the minds of readers for years to come.

“Irresistible…Immensely readable…Benedict and Keteyian bring us along for the ride in a whirlwind of a biography that reads honest and true” (The Wall Street Journal). Ultimately, Tiger Woods is “a big American story…exhilarating, depressing, tawdry, and moving in almost equal measure” (The New York Times).
Jeff Benedict is the bestselling author of sixteen nonfiction books, including the #1 New York Times bestseller Tiger Woods, with Armen Keteyian. He has also been a special-features writer for Sports Illustrated and the Los Angeles Times, and his essays have appeared in the New York Times. His stories have been the basis of segments on 60 Minutes, CBS Sunday Morning, HBO’s Real Sports with Bryant Gumbel, the Discovery Channel, Good Morning America, 48 Hours, 20/20, the NFL Network, NPR, and ESPN’s Outside the Lines. He is also a television and film producer. He lives with his wife and four children in Connecticut.

Armen Keteyian is a CBS News correspondent based in New York and a longtime contributing correspondent to 60 Minutes. An eleven-time Emmy Award winner, he is widely regarded as one of the finest investigative journalists in the country. A former writer-reporter at Sports Illustrated, he is also the author or coauthor of ten previous books, including the New York Times bestsellers Raw Recruits and The System. Born and raised in Michigan, he now lives with his wife, Dede, in Fairfield, Connecticut, and San Clemente, California.

“Irresistible . . . Immensely readable . . . The authors have laid out a saga that is part myth, part Shakespeare, part Jackie Collins. . . . Benedict and Keteyian bring us along for the ride in a whirlwind of a biography that reads honest and true.”
—Leigh Montville, The Wall Street Journal

“There is beauty and awe in this perfectly pitched biography . . . It has torque and velocity . . . It’s a confident and substantial book that’s nearly as sleek as a Christopher Nolan movie. It makes a sweet sound, like a well-struck golf ball. I found it exhilarating, depressing, tawdry and moving in almost equal measure. It’s a big American story. . . . The authors bring grainy new detail to almost every aspect of Woods’s life.”
—Dwight Garner, The New York Times

“An ambitious 360-degree portrait of golf’s most scrutinized figure . . . The book features fresh reporting on almost every significant element of Woods’ story. . . . It is a book brimming with revealing details.”
—Sam Weinman, Golf Digest

“I have been trying to write about Tiger since he was a teenager. I thought he was unknowable. This book proves me wrong. Here, finally, is Tiger Woods.”
—Michael Bamberger, senior writer for Sports Illustrated and author of Men in Green

“Chilling . . . Exhaustively researched . . . The authors present Woods as a man ‘both blessed and cursed’ by his otherworldly ability to separate his off-the-course problems from his performance on it. Tiger Woods is a fascinating analysis of the former, but for golf fans—and probably for Woods himself—his worth will still be judged by the latter. . . . What Benedict and Keteyian do better than in any biography I’ve read about Woods is detail the human costs of this machine-like focus.”
—John Paul Newport, Bloomberg Businessweek

“When you read Tiger Woods, you realize these are not just high-level reporting gotchas. This is Tiger’s life laid bare.”
—Bryan Curtis, The Ringer

“A searing biography of golf’s most blazing talent.”
—GOLF magazine

“Juicy . . . A far-reaching portrait of Tiger on and off the golf course . . . Plenty of new revelations, and incredible additional detail and insight into Tiger’s professional and personal life.”
—Golf Digest

“Meticulously reported, scrupulously fair, endlessly interesting, Jeff Benedict and Armen Keteyian’s Tiger Woods reveals the human being long-hidden behind the golf genius. The story of Tiger’s passage from driven prodigy, to lonely hero, to disgraced celebrity is compelling, and often poignant, from first page to last.”
—Jeffrey Toobin, author of American Heiress and The Nine

“If King Lear had been about golf, or if the great Russian novelists had turned their lens toward modern expectations and fame, toward the most American of fathers and sons, the result would be this book. The rise and fall and return of Tiger Woods in these pages is both mythic and poignantly small and human.”
—Wright Thompson, senior writer, ESPN The Magazine