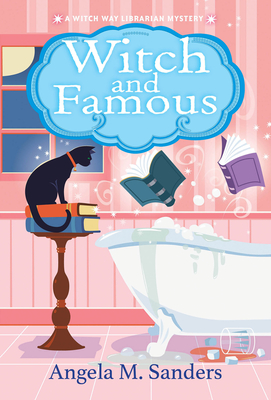 This is book number 3 in the Witch Way Librarian Mysteries series.

Set in small-town Oregon, the latest in the witty, charming Witch Way Librarian series from bestselling and acclaimed author Angela M. Sanders features a spellbinding heroine, a clever cat familiar, a glamorous movie star—and of course, murder. The perfect read for fans of Bailey Cates, Adele Abbott, Juliet Blackwell, and all mystery lovers with a taste for the witchy.

For a tiny town, picturesque Wilfred, Oregon, has everything, including an impressive library housed in a Victorian mansion, a touch of magic in new librarian and fledgling witch, Josie Way, a visiting movie star—and a curious tendency toward murder…

Josie and all of Wilfred are buzzing with excitement. A-list movie star Daphne Morris has chosen to interview Roz, assistant librarian and novelist, for her book club. But when the glamorous actress quickly charms both Roz’s long-time love and Sheriff Sam, the object of Josie’s unrequited affection, Josie turns to the whispers from her beloved books for ideas on revising the plot. Yet soon there’s another twist . . .

At a party to celebrate the interview, Daphne’s personal chef is found dead in a scene that all too closely echoes one in Roz’s novel. It’s clear to Josie that someone’s idea of a happy ending means framing her friend. She’ll have to read between the lines with the help of the library’s enchanted stacks, guidance from her magical grandmother’s letters, and her cat familiar, Rodney, to solve this murder before someone decides to stage a deadly sequel . . .

Angela M. Sanders is the author of the bestselling Joanna Hayworth Vintage Clothing Mysteries, the Witch Way Librarian Mystery series, The Booster Club Capers, and the Kite Shop Mysteries, written under the name Clover Tate. In addition to cozy mysteries, she regularly writes articles on food, vintage clothing, personalities and perfume for Portland Monthly, Now Smell This, the French perfume magazine Nez, and various food magazines. A former congressional investigator, she now writes full-time and is a member of Novelists, Inc., International Thriller Writers and Sisters in Crime. Angela has two cats—one of whom is black of course—a witch’s freckle in her left eye, and learned to read tarot cards from a pagan priestess. She lives in Portland, Oregon and can be found online at AngelaMSanders.com.