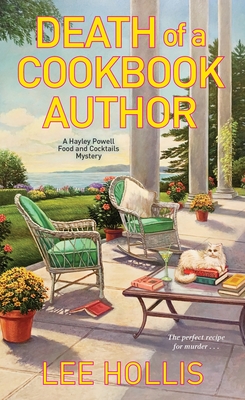 This is book number 10 in the Hayley Powell Mystery series.

Food and cocktails columnist Hayley Powell will be cooking alongside top chefs at a cookbook author's party. But a killer plans to ruin her appetite . . .

When Hayley's idol, cookbook author and TV personality Penelope Janice, invites her to participate in a Fourth of July celebrity cook-off at her seaside estate in Seal Harbor, Maine, Hayley couldn't be more flattered. She just hopes she can measure up. With a who's who of famous chefs whipping up their signature dishes, this holiday weekend has all the ingredients for a once-in-a-lifetime culinary experience.

Instead, Hayley gets food poisoning her first night and thinks she overhears two people cooking up a murder plot. The next morning, a body is found at the bottom of a cliff. Tragic accident or foul play? To solve a real cliffhanger, Hayley will need to uncover some simmering secrets—before a killer boils over again . . .

Praise for Death of a Pumpkin Carver

“Well-written . . . the story will keep any reader’s attention. After reading just one and meeting these hysterical characters there is no doubt that you’ll go back.”
—Suspense Magazine
Lee Hollis is the pen name for a brother and sister writing team. Rick Copp is a veteran Hollywood writer/producer and also the author of three other mystery novel series under his own name and Lee Hollis. He lives in Palm Springs, CA. Holly Simason is an award-winning food and cocktails columnist who lives in North Carolina. You can follow them on Facebook (Lee Hollis), Twitter (@leehollisbooks), and Instagram (leehollisbooks).