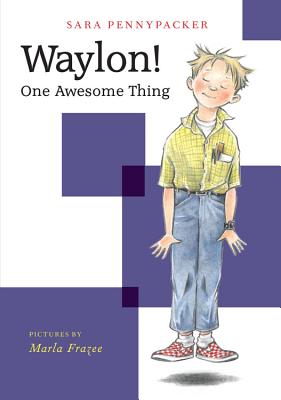 This is book number 1 in the Waylon series.

Waylon has lots of ideas for making life more awesome through science, like teleportation, human gills, and attracting cupcakes by controlling gravity. But it's impossible for him to concentrate on his inventions when he's experiencing his own personal Big Bang.

Arlo Brody is dividing the fourth grade boys into two groups. Waylon would rather be friends with everyone. Well, everyone except the scary new kid, Baxter Boylen.

Waylon's older sister, Neon, is shooting away from the family. He wishes everything would go back to the way it was before she started wearing all black and saying "What's the point?" all the time.

Just when it looks as though Waylon's universe is exploding, something happens to bring it all together again, and it is, without a doubt, One Awesome Thing.

Sara Pennypacker splits her time between Florida and Massachusetts, were she feels lucky to be able to write every day. She is the author of many children's books, including the #1 New York Times best-seller Pax; seven in the New York Times best-selling Clementine series; two in the Stuart series; Meet the Dullards; Summer of the Gypsy Moths; and Sparrow Girl. Her books have won numerous accolades, including a Golden Kite Award, a Christopher Award, and several children's choice state awards, and they have appeared on many Best Books of the Year lists. For more information, visit www.sarapennypacker.com.

Marla Frazee illustrated all of the books in the Clementine series. She was awarded a Caldecott Honor on two occasions: for All the World by Liz Garton Scanlon, and her own A Couple of Boys Have the Best Week Ever. She is also the author-illustrator of Roller Coaster, Walk On!, Santa Claus the World's Number One Toy Expert, The Boss Baby (soon to be a Dreamworks film), Boot & Shoe, and The Farmer and the Clown. Marla teaches at Art Center College of Design in Pasadena, California, has three grown sons, and works in a small backyard cabin under an avocado tree. Visit her at www.marlafrazee.com.

*"Pennypacker is at her best here, creating vivid characters and showing the subtly shifting connections between them. Alternatively laugh-aloud funny and melt-your-heart tender, this illustrated chapter book is a great read-aloud choice and a memorable find for independent readers."—Booklist (starred review)

"In Pennypacker's skillful hands, Waylon is an appealing every kid whose passion for science just might spark readers' curiosity as he contemplates ideas from angstroms to alien hand syndrome. VERDICT: A winning, welcome new series for chapter book readers."—School Library Journal (starred review)

"This Clementine series spin-off features another likable kid with lots of heart. Give this to readers who enjoy realistic school stories with a tinge of scientific inquiry."—Horn Book

"Pennypacker puts a pleasing bow on the popular series, giving Clementine a complicated family situation to deal with and allowing her to explore the feelings that come with being angry at someone you love. Ingenious, too, is the way she finds for Clementine to finally resolve the situation, reminding readers that love can be as important as taking a stand. Frazee's illustrations always charm, and that's true here."—Booklist