The Sport and Prey of Capitalists: How the Rich Are Stealing Canada's Public Wealth (Paperback) 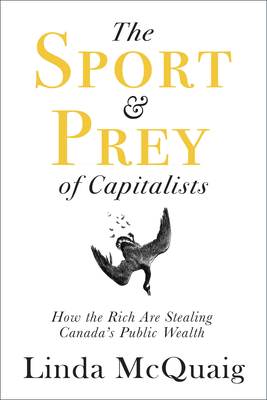 The Sport and Prey of Capitalists: How the Rich Are Stealing Canada's Public Wealth (Paperback)


Usually Ships in 3-7 Days
Why are we selling off the impressive public enterprises we often battled as a nation to create?

In the early 1900s, thousands of Canadians battled wealthy interests, winning control of Niagara Falls and creating a public power company. Another popular movement succeeded in creating Canada's public broadcasting system to counter American dominance of the airwaves. And a Canadian doctor established a publicly owned laboratory that saved countless lives by producing affordable medications, contributing to medical breakthroughs and helping to eradicate smallpox throughout the world.

But in recent decades, we have allowed our inspiring public enterprises to be privatized and our vital public programs downsized, leaving us increasingly dominated by the forces of private greed that rule the marketplace.

In The Sport and Prey of Capitalists, Linda McQuaig challenges the dogma of privatization, which has defined our political era. She argues that now more than ever, as we grapple with climate change and income inequality, we need to expand, not shrink, our public sphere.
Linda McQuaig is the recipient of a National Newspaper Award for investigative reporting. She is also the author of eight national bestsellers, including Shooting the Hippo, selected by the Literary Review of Canada as one of the twenty-five most influential books of the past twenty-five years.