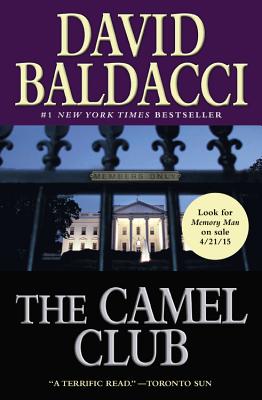 After witnessing a shocking murder, four conspiracy theorists team up with a Secret Service agent to uncover the government corruption that threatens to cause an international terrorism crisis in this New York Times bestselling thriller.

Welcome to THE CAMEL CLUB.

Existing at the fringes of Washington, D.C., the Club consists of four eccentric members. Led by a mysterious man known as "Oliver Stone," they study conspiracy theories, current events, and the machinations of government to discover the "truth" behind the country's actions. Their efforts bear little fruit--until the group witnesses a shocking murder...and becomes embroiled in an astounding, far-reaching conspiracy. Now the Club must join forces with a Secret Service agent to confront one of the most chilling spectacles ever to take place on American soil-an event that may trigger the ultimate war between two different worlds. And all that stands in the way of this apocalypse is five unexpected heroes.

DAVID BALDACCI is a global #1 bestselling author, and one of the world's favorite storytellers. His books are published in over forty-five languages and in more than eighty countries, with 150 million copies sold worldwide. His works have been adapted for both feature film and television. David Baldacci is also the cofounder, along with his wife, of the Wish You Well Foundation, a nonprofit organization dedicated to supporting literacy efforts across America. Still a resident of his native Virginia, he invites you to visit him at DavidBaldacci.com and his foundation at WishYouWellFoundation.org.

"Baldacci is a master at building suspense . . . will leave readers breathless."—Booklist

"An original, effervescent thriller . . . page-turning fiction that grips and scares, and offers plenty to think about later."—Toledo Blade (OH)

"Baldacci knows exactly what his readers want-just enough high-tech suspense to while away a few hours in front of a warm winter fire."—Fort Worth Star-Telegram

"Fascinating . . . Baldacci is an author who promises a good story and then delivers it."—Publishers Weekly

"Cleverly constructed . . . If you pick this book up, you'll stick with it all the way."—St. Louis Post-Dispatch