Death of an Outsider (A Hamish Macbeth Mystery #3) (Mass Market) 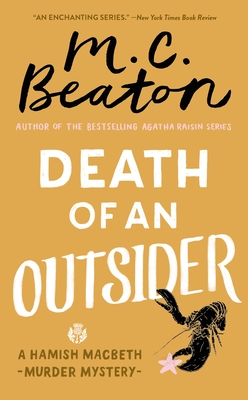 Death of an Outsider (A Hamish Macbeth Mystery #3) (Mass Market)

This is book number 3 in the A Hamish Macbeth Mystery series.

Death of an Outsider: A Hamish Macbeth Mystery

The most hated man in the most dour town in Scotland is sleeping with the fishes, or-more accurately-dumped into a tank filled with crustaceans. All that remain of the murdered victim are his bones. But after the lobsters are shipped off to Britain's best restaurants, the whole affair quickly lands on the plate of Constable Hamish Macbeth.

Exiled with his dog, Towser, to the dreary outpost of Cnothan, Macbeth sorely misses his beloved Lochdubh, his formerly beloved Priscilla Halburton-Smythe, and his days of doing nothing but staring at the sheep grazing in a nearby croft. Now the lawman has to contend with a detective chief inspector who wants the modus operandi hushed up, a dark-haired lass who has an ulterior motive to seduce him, and a killer who has made mincemeat of his victim-and without doubt will strike again . . .
M. C. Beaton has won international acclaim for her New York Times bestselling Hamish Macbeth mysteries. The BBC has aired 24 episodes based on the series. Beaton is also the author of the bestselling Agatha Raisin series, which will air as an eight-episode dramatic series on Sky1, starring Ashley Jensen. She lives in the Cotswolds with her husband. For more information, you can visit MCBeaton.com.