Death of a Cad (A Hamish Macbeth Mystery #2) (Mass Market) 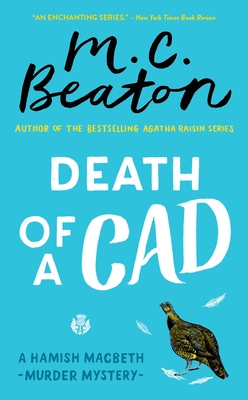 Death of a Cad (A Hamish Macbeth Mystery #2) (Mass Market)

This is book number 2 in the A Hamish Macbeth Mystery series.

Death of a Cad: A Hamish Macbeth Mystery

When Priscilla Halburton-Smythe brings her London playwright fiance home to Lochdubh, everybody in town is delighted . . . except for love-smitten Constable Hamish Macbeth. Yet his affairs of the heart will have to wait. Vile, boorish Captain Bartlett, one of the guests at Priscilla's engagement party, has just been found murdered-shot while on a grouse hunt. Now with many titled party guests as the prime suspects, each with a reason for snuffing out the despicable captain, Hamish must smooth ruffled feathers as he investigates the case. When the hidden culprit strikes again, Hamish will find himself trying to save Priscilla from a miserable marriage-and catch a killer before he flies the coop.
M. C. Beaton has won international acclaim for her New York Times bestselling Hamish Macbeth mysteries. The BBC has aired 24 episodes based on the series. Beaton is also the author of the bestselling Agatha Raisin series, which will air as an eight-episode dramatic series on Sky1, starring Ashley Jensen. She lives in the Cotswolds with her husband. For more information, you can visit MCBeaton.com.