Citizenship and Service: The Politics of Civic National Service in Israel (Hardcover) 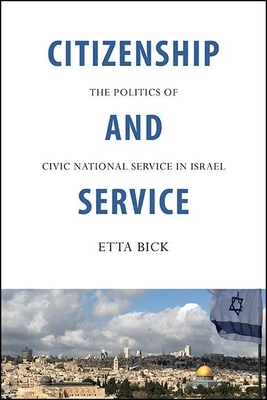 All citizens in a democracy are promised the same guaranteed rights, but should they have the same obligations? Should minorities with different attitudes toward the state be obliged to do national service in the name of equality? And what are the social and political consequences for minorities not given the opportunity to serve? This groundbreaking study examines civic (non-military) national service in Israel from independence until today, focusing on the controversies that ensued as the ethos of Israeli citizenship evolved from republican to liberal. Civic national service for religious girls was instituted in 1971 on a voluntary basis while remaining closed to others. After 2000, the program gradually extended to youth unsuitable for military service, Haredim (ultra-Orthodox), and Arabs. Etta Bick reveals the politics surrounding civic service policy using government documents and reports, newspaper accounts, and interviews. Civic national service remains a subject of contention both in the Arab community and among the Haredim, where some choose to serve despite the opposition of their leaders. Bick concludes that minority participation in civic national service is a positive and critical step toward their greater inclusion and integration into Israeli society. If Israeli policymakers adopt a more communitarian approach to citizenship and to civic national service, it will contribute to building stronger communities and empowering youth, benefitting all.

Etta Bick is Research Associate at Ariel University Israel, where she was a senior lecturer in Political Science until her retirement. She is the coeditor (with Eyal Lewin and Dan Naor) of Comparative Perspectives on Civil Religion, Nationalism, and Political Influence and the author of many research articles on Israeli politics.