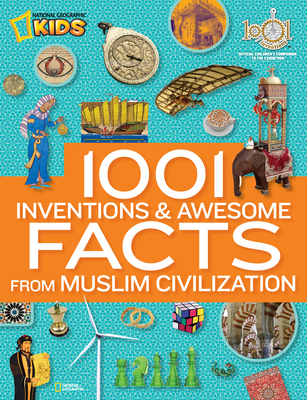 
Usually Ships in 3-7 Days
We often think that people from a thousand years ago were living in the Dark Ages. But from the 7th century onward in Muslim civilization there were amazing advances and inventions that still influence our everyday lives. People living in the Muslim world saw what the Egyptians, Chinese, Indians, Greek, and Romans had discovered and spent the next one thousand years adding new developments and ideas. Inventors created marvels like the elephant water clock, explorers drew detailed maps of the world, women made scientific breakthroughs and founded universities, architects built huge domes larger than anywhere else on earth, astronomers mapped the stars and so much more! This book takes the wining formula of facts, photos, and fun, and applies it to this companion book to the 1001 Inventions exhibit from the Foundation for Science, Technology, and Civilization. Each page is packed with information on this little-known history, but also shows how it still applies to our world today.
NATIONAL GEOGRAPHIC is one of the world’s leading nonfiction publishers, proudly supporting the work of scientists, explorers, photographers, and authors, as well as publishing a diverse list of books that celebrate the world and all that is in it. National Geographic Books creates and distributes print and digital works that inspire, entertain, teach, and give readers access to a world of discovery and possibility on a wide range of nonfiction subjects from animals to travel, cartography to history, fun facts to moving stories. A portion of all National Geographic proceeds is used to fund exploration, conservation, and education through ongoing contributions to the work of the National Geographic Society.
“National Geographic has developed a book that's as packed with information as an encyclopedia but as much fun to read as a comic book… Readers interested in the value Muslim civilizations have added to our global village will be hard-pressed to find a more stimulating introduction than this one.” -- Kirkus Reviews


“This heavily illustrated volume…stands on its own as an accessible history of the golden era that spanned from the 7th to the 17th century.” –Boston Sunday Globe