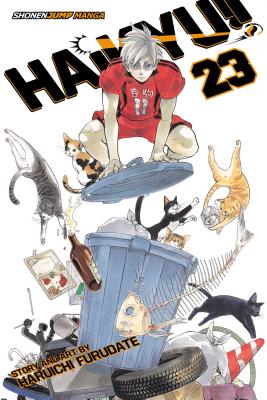 This is book number 23 in the Haikyu!! series.

Nekoma’s defensive ace, Yaku, is removed from the court with an injury, leaving the whole team grasping at straws! Even with Nohebi stubbornly picking away at the hole Yaku left behind, Nekoma’s captain, Kuroo, continues to insist they have a chance at winning. Who will grab the last slot in the Spring Tournament? Will it be the Cats or the Snakes?!
Haruichi Furudate began his manga career when he was 25 years old with the one-shot Ousama Kid (King Kid), which won an honorable mention for the 14th Jump Treasure Newcomer Manga Prize. His first series, Kiben Gakuha, Yotsuya Sensei no Kaidan (Philosophy School, Yotsuya Sensei’s Ghost Stories), was serialized in Weekly Shonen Jump in 2010. In 2012, he began serializing Haikyu!! in Weekly Shonen Jump, where it became his most popular work to date.