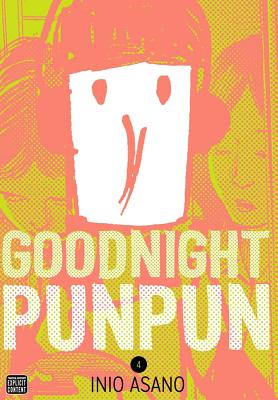 This is book number 4 in the Goodnight Punpun series.

Punpun is on his own now.

His mom is dead and his dad is useless.

When he’s not working crappy part-time jobs, he spends most of his time on the floor of his room.

But buck up, Punpun! It’s only for the rest of your life, right?
Inio Asano, a bona fide earthling, was born in Ibaraki, Japan, in 1980. In 2001, his short story “Uchu kara Konnichiwa” (Hello from Outer Space) won the first Sunday GX Rookie Prize. Later, GX published his series Subarashii Sekai, available in English from VIZ Media as What a Wonderful World! His other works include Hikari no Machi (City of Light), Nijigahara Holograph and Umibe no Onna no Ko (A Girl on the Shore), as well as solanin and Goodnight Punpun, also available from VIZ Media.