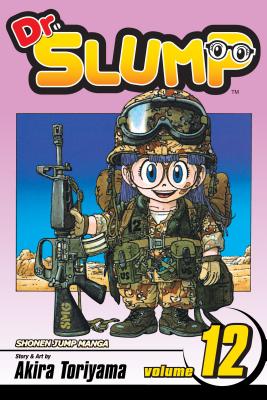 This is book number 12 in the Dr. Slump series.

Robot girl hijinks from the creator of Dragon Ball!

When goofy inventor Senbei Norimaki creates a precocious robot named Arale, his masterpiece turns out to be more than he bargained for!

In an especially tearful episode, Senbei fixes the anti-gravity device on the Tsuns family's rocket, and they leave Penguin Village forever...or at least, for a few pages. And in a slightly less tearful episode, Senbei fixes the anti-gravity device (again!), this time so that King Nikochan can return home--with some unwanted stowaways: Arale and the Gatchans!
Renowned worldwide for his playful, innovative storytelling and humorous, distinctive art style, Akira Toriyama burst onto the manga scene in 1980 with the wildly popular Dr. Slump. His hit series Dragon Ball (published in the U.S. as Dragon Ball and Dragon Ball Z) ran from 1984 to 1995 in Shueisha's Weekly Shonen Jump magazine. He is also known for his design work on video games such as Dragon Quest, Chrono Trigger, Tobal No. 1, and Blue Dragon. His recent manga works include COWA!, Kajika, Sand Land, Neko Majin, and a children's book, Toccio the Angel. He lives with his family in Japan.