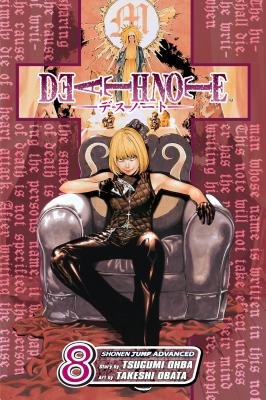 This is book number 8 in the Death Note series.

Light--working as Kira, the newest member of the NPA intelligence bureau, and L--has nearly succeeded in creating his ideal world. But the years of uncontested victory have made him complacent, and he is unprepared for a new attack close to home. With his younger sister Sayu kidnapped and the NPA's Death Note demanded as ransom, Light must travel across the world and confront two new adversaries, each with a very different agenda. Will Light's quick wits be a match for this new challenge, or will he be forced to choose between Kira's ambitions and his own family's lives?
Born in Tokyo, Tsugumi Ohba is the author of the hit series Death Note, Bakuman and Platinum End..