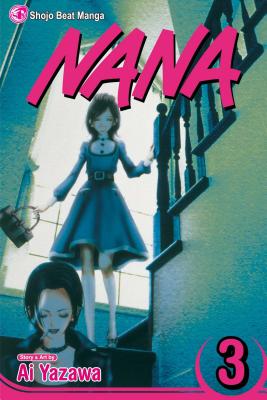 This is book number 3 in the Nana series.

A chance meeting on a train to Tokyo sends two girls named Nana on a collision course with destiny!

Nana "Hachi" Komatsu hopes that moving to Tokyo will help her make a clean start and leave her capricious love life behind her. Nana Osaki, who arrives in the city at the same time, has plans to score big in the world of rock'n'roll. Although these two young women come from different backgrounds, they quickly become best friends in a whirlwind world of sex, music, fashion, gossip and all-night parties!

Things are slowly coming together for Nana Osaki. The guitarist and drummer from her old band have joined her in Tokyo and she's finally found a ripping new bass player to replace Ren Honjo. The Black Stones are back and they're ready to kick some ass.

Nana Komatsu, however, can't shake her old nemesis, the Demon Lord. She's stuck in a dead-end job and there's trouble brewing with her boyfriend, Shoji. He's been working late and hasn't exactly been the most attentive lover. Poor Nana. Life in Tokyo is turning out to be a total bummer.
Ai Yazawa is the creator of many popular manga titles, including Tenshi Nanka Janai (I'm No Angel) and Gokinjo Monogatari (Neighborhood Story). Another series, Kagen no Tsuki (Last Quarter), was made into a live-action movie and released in late 2004. American readers were introduced to Yazawa's stylish and sexy storytelling in 2002 when her title Paradise Kiss was translated into English.

Nana has become the all-time best selling shojo title from Japanese publishing giant Shueisha, and the series even garnered a Shogakukan Manga Award in the girls category in 2003. A live-action Nana movie was released in Japan in 2006.