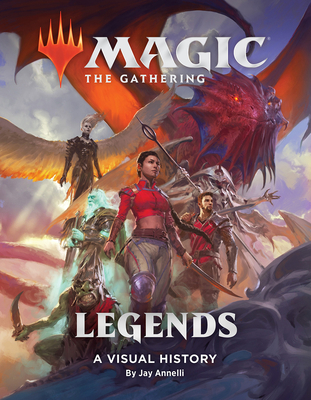 By Wizards of the Coast, Jay Annelli


Usually Ships in 3-7 Days
An official guide to the most iconic legends and legendary creatures from the world of Magic: The Gathering

The world of Magic: The Gathering is home to many fantastical characters and creatures, but perhaps none so intriguing as its legends. Legendary dragons, demons, angels, goblins, vampires, merfolk, wizards, and more roam the multiverse. These characters harken back to Magic’s early history, having been introduced in one of the first Magic card sets (1994’s Legends); new legends continue to tell epic stories in lore and on the battlefield through the present day.

Magic: The Gathering: Legends showcases high-quality reproductions of the legendary card art from across the game's history—in many instances for the first time outside of the card frame—along with accompanying histories written by Jay Annelli. This collection also offers exclusive insight into the art and mythology behind some of Magic: The Gathering’s most powerful, popular, and enduring legends, including Niv-Mizzet, Emmara Tandris, Marit Lage, Sisay, Atraxa, the Eldrazi titans, Edgar Markov, Queen Marchesa, Zurgo, Pia Nalaar, Zacama, King Algenus Kenrith, Snapdax, and many, many more.

Wizards of the Coast, a subsidiary of Hasbro, is an American publisher of collectible trading card games and board games. Their headquarters are in Renton, Washington. Jenna Helland is a writer and editor for Wizards of the Coast in Renton, Washington. Before moving to the Northwest, she was a journalist in Missouri, Virginia, and California. Helland is the author of The August 5.

Jay Annelli is a Vorthos (lore) writer, consultant for Wizards of the Coast, and co-host of The Vorthos Cast. He lives in Baltimore.
“Part artbook, part reference guide, Magic: The Gathering: Legends is a compendium of the card game’s vibrant cast of characters…If you’re interested in delving into the lore, this quick read has an overview on the story’s most iconic personalities—the perfect jumping off point.”
— Forbes