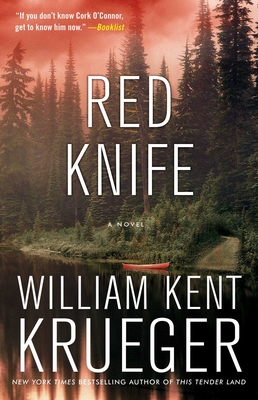 “This latest in an outstanding series featuring PI Corcoran O'Connor is one of the best yet. Cork O'Connor connects with his heritage in this story of death, drugs, and revenge.”
— George Fox Rishel, The Sly Fox, Virden, IL

When the daughter of a powerful businessman dies as a result of her meth addiction, her father, strong-willed and brutal Buck Reinhardt, vows revenge. His target is the Red Boyz, a gang of Ojibwe youths accused of supplying the girl’s fatal drug dose. When the head of the Red Boyz and his wife are murdered in a way that suggests execution, the Ojibwe gang mobilizes, and the citizens of Tamarack County brace themselves for war, white against red.

Both sides look to Cork O’Connor, a man of mixed heritage, to uncover the truth behind the murders. A former sheriff, Cork has lived, fought, and nearly died to keep the small-town streets and his family safe from harm. He knows that violence is never a virtue, but he believes that it’s sometimes a necessary response to the evil that men do. Racing to find answers before the bloodshed spreads, Cork himself becomes involved in the darkest of deeds. As the unspeakable unfolds in the remote and beautiful place he calls home, Cork is forced to confront the horrific truth: violence is a beast that cannot be contained.

In Red Knife, Krueger gives his readers a vivid picture of racial conflict in small-town America, as well as a sensitive look at the secrets we keep from even those closest to us and the destructive nature of all that is left unsaid between fathers and sons, husbands and wives, friends and lovers.
William Kent Krueger is the New York Times bestselling author of The River We Remember, This Tender Land, Ordinary Grace (winner of the Edgar Award for best novel), and the original audio novella The Levee, as well as nineteen acclaimed books in the Cork O’Connor mystery series, including Lightning Strike and Fox Creek. He lives in the Twin Cities with his family. Learn more at WilliamKentKrueger.com.

"If you don't know Cork O'Connor, get to know him now." -- Booklist

"Cork O'Connor...is one of those hometown heroes you rarely see...someone so decent and true, he might restore his town's battered faith in the old values." -- The New York Times Book Review

"William Kent Krueger is one of the best mystery writers out there. Any reader who has yet to pick up one of his Cork O'Connor suspense novels is in for a rare treat." -- Vince Flynn