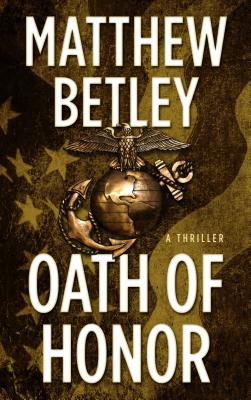 
Email or call for price.
"A high-energy tale that unfolds at a machine-gun pace...Betley has become essential reading." --Booklist
"There's tension, turmoil, and drama on every page. It's a story of action, history, and secrets that is as imaginative as it is compelling. Add this one to your keeper shelf." --Steve Berry, #1 New York Times and Internationally Bestselling Author of The Patriot and The 14th Colony
"Betley continues to turn the screws with the relentless action, unbearable tension, and terrifying threats that we all loved in Overwatch. With Oath of Honor, he cements his position as one of the genre's new stars." --Kyle Mills, #1 New York Times Bestselling Author
A break-neck, edge-of-your-seat thriller that moves from the Aleutian Islands to North Korean spy ships to secret Sudanese prisons as former Marines Logan West and John Quick, now members of an FBI special task force, uncover a global conspiracy that threatens America's position in the current international balance of power.
Logan West and John Quick are sent to Dutch Harbor, Alaska, to investigate the possible presence of a Russian black ops team on a mission to steal United States next-generation technology. The resulting violent confrontation triggers a global search for the stolen technology and threatens to pit the US against China in a looming shadow war and technology race. As Logan and John--joined by the chief of the CIA's Special Operations Group, Cole Matthews--battle their way through Spain, the Mediterranean, and ultimately, across Sudan, an imminent threat arises at home that FBI Deputy Director Mike Benson must face and determine if it is part of the deadly global conspiracy.
Oath of Honor is an intense and gripping follow-up to former Marine Matthew Betley's "brilliantly conceived" (Clive Cussler) Overwatch and solidifies his place among the greatest contemporary thriller writers.