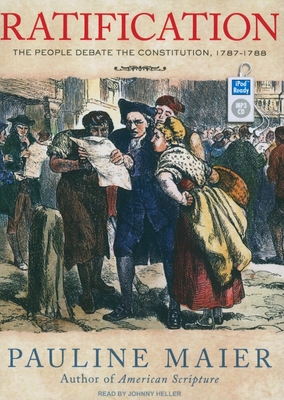 When the Constitutional Convention in Philadelphia adjourned late in the summer of 1787, the delegates returned to their states to report on the new Constitution, which had to be ratified by specially elected conventions in at least nine states. Pauline Maier recounts the dramatic events of the ensuing debate in homes, taverns, and convention halls, drawing generously on the speeches and letters of founding fathers, both familiar and forgotten, on all sides. This is the first narrative history in decades of the ratification debate, with all its significance, and it draws on new scholarship about the ratification process. In Maier's skillful hands, this fascinating yet often overlooked episode in the nation's history comes to life as never before.

Pauline Maier is the William R. Kenan, Jr. Professor of American History at MIT and the author of several books and textbooks on American history, including "American Scripture," which was on the "New York Times Book Review" Editor's Choice list of the best 11 books of 1997 and a finalist for the National Book Critics' Circle Award.

Johnny Heller has narrated some five hundred books and garnered a bunch of swell awards and accolades, including "Publishers Weekly" Listen-Up Awards, Audie Awards and nominations, "AudioFile" Earphones Awards, and selection as one of "AudioFile" magazine's Top 50 Narrators of the 20th Century.

"The ratification of the Constitution was the most comprehensive and consequential political debate in American history. It is quite amazing that the story has never before been told with the knowledge and flair it deserves. Here Pauline Maier, one of the leading historians of the revolutionary era, at the peak of her powers, tells that story with style, wit, and incomparable mastery of the sources." ---Joseph J. Ellis, author of First Family