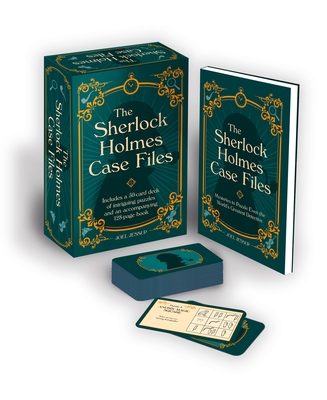 There is nothing more deceptive than an obvious fact. - Sherlock Holmes, The Boscombe Valley Mystery

Sherlock Holmes has come into possession of a pack of cards that once belonged to his diabolical nemesis Professor Moriarty, but what secrets do they hide? Is his long believed dead antagonist back? Or is this all just a wild goose chase left behind by the Professor to torment the great detective? Join Sherlock and his loyal companion Dr. John Watson as they attempt to solve the puzzles concealed within and discover what Moriarty has truly hidden inside. With mathematical mysteries, hidden messages, and all manner of clever conundrums to solve you'll need to hone your own powers of logic and deduction to solve the puzzles that wait within Includes:
- A set of 50 cards
-A 128-page puzzle book
An author and scriptwriter for over 20 years, Joel Jessup has written both puzzle books and works on other subjects as diverse as gnomes, torture, and marketing. His television work has included collaborations with Disney, BBC, and ITV, and he has written several films including an award-winning horror short. He believes all knowledge is useful, no matter the source!