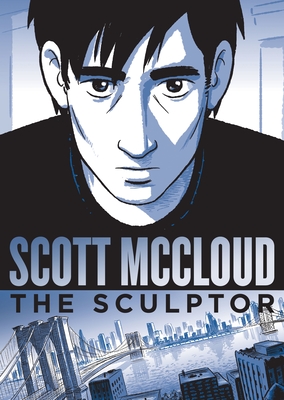 David Smith is giving his life for his art—literally. Thanks to a deal with Death, the young sculptor gets his childhood wish: to sculpt anything he can imagine with his bare hands. But now that he only has 200 days to live, deciding what to create is harder than he thought, and discovering the love of his life at the 11th hour isn't making it any easier!

This is a story of desire taken to the edge of reason and beyond; of the frantic, clumsy dance steps of young love; and a gorgeous, street-level portrait of the world's greatest city. It's about the small, warm, human moments of everyday life…and the great surging forces that lie just under the surface.

Scott McCloud wrote the book on how comics work; now he vaults into great fiction with a breathtaking, funny, and unforgettable work.

Scott McCloud is the award-winning author of Understanding Comics, Making Comics, Zot!, The Sculptor, and many other fiction and non-fiction comics spanning 30 years. An internationally-recognized authority on comics and visual communication, technology, and the power of storytelling, McCloud has lectured at Google, Pixar, Sony, and the Smithsonian Institution.

“Scott McCloud's The Sculptor is the best graphic novel I've read in years. It's about art and love and why we keep on trying. It will break your heart.” —Neil Gaiman

"McCloud is a master of pacing; he compresses and expands time through the size and arrangement of his images, building to a surprise wallop at the end."—LA Times

"McCloud is engaging when he's addressing the difficulties faced by the artist in society, but when he gets to show two fetching young city dwellers falling for each other? That's when he really comes home. David's relationship with Meg, a comely bike messenger, is everything a love story should be: inexorable and ill-omened, plangent and astringent." —NPR

"This inventive and touching love story is compelling proof that McCloud can walk the walk as well as talking the talk.” —The Gaurdian

“The fluidity of McCloud's visual narrative carries us along with a sweep impossible to duplicate in prose, and, through it its climax, the story's commitment to its harsh, inevitable, but ultimately sublime outcome qualifies this as a work of stunning, timeless graphic literature.” —Booklist, starred review