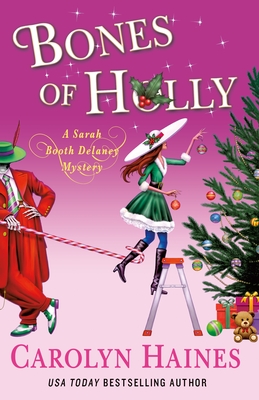 This is book number 25 in the A Sarah Booth Delaney Mystery series.

Bones of Holly is the next novel from Carolyn Haines in the series that Kirkus Reviews characterizes as “Stephanie Plum meets the Ya-Ya Sisterhood” featuring sassy Southern private investigator Sarah Booth Delaney.

Sarah Booth and Tinkie, along with baby Maylin, are in Bay St. Louis, Mississippi for Christmas this year, as judges for the annual library tree decorating contest.

The other two judges are writers Sandra O’Day and Janet Malone. They’re bestselling Mississippi authors, but bitter competitors. In fact, the feud between them is the stuff of legends. For years, they’ve brawled, their sales skyrocketing with each cat fight. Sandra’s most recent true crime book documents the 1920s rum-running era of Al Capone, who built a mansion in BSL and a distribution network for his liquor. Janet’s book, scheduled to be published in January, is a fictional account of the same material—which only heightens their bitter rivalry.

Sarah Booth and Tinkie are shopping with little Maylin when they see Sandra and Janet outside a bookstore, fur flying, and when Sandra vanishes from her own gala later that night, suspicion turns to Janet. Janet accuses Sandra of attempting to manipulate the media by a fake disappearance, but is it a stunt, or is something more sinister at play?

Sarah Booth and Tinkie will have to dive deep into the history of Bay St. Louis, and even Al Capone himself, to get to the bottom of this case. But the trail in fact leads them back to several prominent families still residing in the area. Families who may not want their secrets known…

Carolyn Haines is the USA Today bestselling author of the Sarah Booth Delaney mystery series and a number of other books in mystery and crime, including the Pluto's Snitch paranormal-historical mystery series, and Trouble, the black cat detective romantic suspense books. She is the recipient of the Harper Lee Award for Distinguished Writing, the Richard Wright Award for Literary Excellence, and the Mississippi Writers Guild Lifetime Achievement Award. She is a former journalist, bartender, photographer, farmhand, and college professor and lives on a farm where she works with rescue cats, dogs, and horses.

"Charm-drenched....Fans will love catching up with their favorite detectives, who never forget that they are Southern ladies at heart." —Publishers Weekly

“Haines shows Sarah at her madcap best back in her hometown in this clever adventure. This is crazy cozy with a little something for everyone: paranormal doings, plenty of Evanovich zaniness, and a cast of eccentrics.”
—Booklist on Bone to Be Wild

“Enjoyable…Jitty, the headstrong ghost who shares Sarah Booth’s family home, is just one of the many well-drawn characters who help bring this Southern tale to colorful life.” —Publishers Weekly on Rock-a-Bye Bones

"Distinctive characters and an atmospheric setting elevate this paranormal cozy. Series fans and newcomers alike will be satisfied." —Publishers Weekly on Game of Bones

"A dark mystery, effectively framed by its well-drawn Mississippi Delta setting." —Booklist on Game of Bones

"A sure pleaser in both the mystery and the romance department. If you like a satisfying cozy Southern whodunit, Charmed Bones fits the bill." —RT Book Reviews