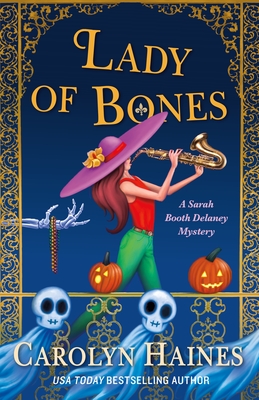 This is book number 24 in the A Sarah Booth Delaney Mystery series.

It’s Halloween season in Mississippi as Sarah Booth and the gang gather to decorate and gush over Tinkie’s new baby, Maylin. Sarah Booth is just about to refresh the cocktails when she hears a knock on the door and opens it to find a woman named Frankie, distraught at the disappearance of her daughter Christa, a young journalist. Christa had been investigating the disappearance of young women in New Orleans over a five-year period—one every year around Halloween. Now Christa herself is missing, and Frankie fears it may be connected to a cult based in the Garden District, called People of Eternity.

People of Eternity are known to have far-reaching connections which Frankie worries may reach as high as law enforcement. Refusing to contact the authorities, she turns to Delaney Detective Agency as her only hope.

Despite initial reservations, Sarah Booth accepts the case, which takes her on a journey to a secret underworld of beguiling cult leaders, witchcraft, and potentially human sacrifice. She’ll have to keep her wits about her if she wants to crack this case…and make it home alive.

Carolyn Haines is the USA Today bestselling author of the Sarah Booth Delaney mystery series and a number of other books in mystery and crime, including the Pluto's Snitch paranormal-historical mystery series, and Trouble, the black cat detective romantic suspense books. She is the recipient of the Harper Lee Award for Distinguished Writing, the Richard Wright Award for Literary Excellence, and the Mississippi Writers Guild Lifetime Achievement Award. She is a former journalist, bartender, photographer, farmhand, and college professor and lives on a farm where she works with rescue cats, dogs, and horses.

"Taut...Haines’s message about vulnerable people who are prey to unscrupulous individuals, juxtaposed with the determination of Sarah Booth’s circle to find the missing women, adds poignancy. Cozy readers will enjoy spending time with Sarah Booth and company." —Publishers Weekly

"An entertaining romp for devotees of the irrepressible Sarah Booth." —Booklist

"Haines shows Sarah at her madcap best back in her hometown in this clever adventure. This is crazy cozy with a little something for everyone: paranormal doings, plenty of Evanovich zaniness, and a cast of eccentrics."
—Booklist on Bone to Be Wild

"Enjoyable…Jitty, the headstrong ghost who shares Sarah Booth’s family home, is just one of the many well-drawn characters who help bring this Southern tale to colorful life." —Publishers Weekly on Rock-a-Bye Bones

"Distinctive characters and an atmospheric setting elevate this paranormal cozy. Series fans and newcomers alike will be satisfied." —Publishers Weekly on Game of Bones

"A dark mystery, effectively framed by its well-drawn Mississippi Delta setting." —Booklist on Game of Bones

"A sure pleaser in both the mystery and the romance department. If you like a satisfying cozy Southern whodunit, Charmed Bones fits the bill." —RT Book Reviews