Crack-Up Capitalism: Market Radicals and the Dream of a World Without Democracy (Hardcover) 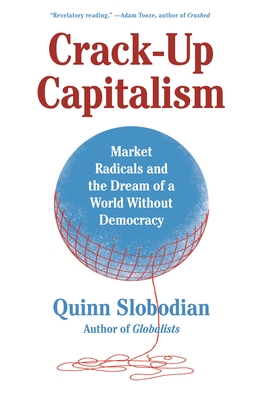 Crack-Up Capitalism: Market Radicals and the Dream of a World Without Democracy (Hardcover)

In a revelatory dispatch from the frontier of capitalist extremism, an acclaimed historian of ideas shows how free marketeers are realizing their ultimate goal: an end to nation-states and the constraints of democracy.

Look at a map of the world and you’ll see a colorful checkerboard of nation-states. But this is not where power actually resides. Over the last decade, globalization has shattered the map into different legal spaces: free ports, tax havens, special economic zones. With the new spaces, ultracapitalists have started to believe that it is possible to escape the bonds of democratic government and oversight altogether.

Crack-Up Capitalism follows the most notorious radical libertarians—from Milton Friedman to Peter Thiel—around the globe as they search for the perfect space for capitalism. Historian Quinn Slobodian leads us from Hong Kong in the 1970s to South Africa in the late days of apartheid, from the neo-Confederate South to the former frontier of the American West, from the medieval City of London to the gold vaults of right-wing billionaires, and finally into the world’s oceans and war zones, charting the relentless quest for a blank slate where market competition is unfettered by democracy.

Quinn Slobodian is the author of the award-winning Globalists: The End of Empire and the Birth of Neoliberalism, which has been translated into six languages. A frequent contributor to the Guardian, Foreign Policy, Dissent, the Nation, the New Statesman, and the New York Times, he is a professor of the history of ideas at Wellesley College. He lives in Cambridge, Massachusetts.