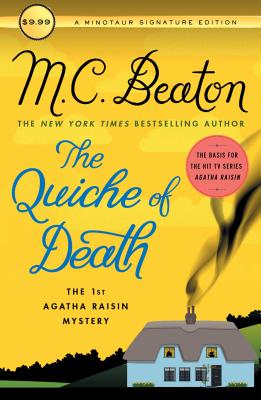 This is book number 1 in the Agatha Raisin Mysteries series.

Putting all her eggs in one basket, Agatha Raisin gives up her successful PR firm, sells her London flat, and settles in for an early retirement in the quiet village of Carsely. But she soon finds her life of leisure isn’t all it’s cracked up to be.

Bored, lonely, and used to getting her way, she enters a local baking contest: Surely a blue ribbon for the best quiche will make her the toast of the town. But her recipe for social advancement sours when the judge, Mr. Cummings-Browne, not only snubs her entry but also falls over dead! After her quiche’s secret ingredient turns out to be poison, she must reveal the unsavory truth. . . .

That is, Agatha has never baked a thing in her life! In fact, she bought her entry ready-made from an upper-crust London quicherie. Grating on the nerves of several Carsely residents, she is soon receiving sinister notes. Has her cheating and meddling landed her in hot water, or are the threats related to the suspicious death? It may mean the difference between egg on her face and a coroner’s tag on her toe. . . .

The Quiche of Death, the first book in this beloved series, is now a Minotaur Signature Edition, complete with a discussion guide and essay by the author.