The Mayflower: The Families, the Voyage, and the Founding of America (Paperback) 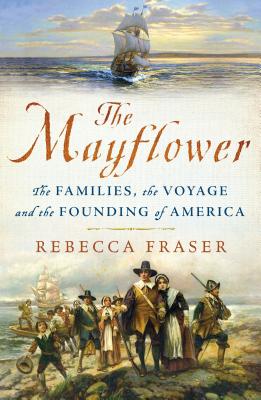 From acclaimed historian and biographer Rebecca Fraser comes a vivid narrative history of the Mayflower and of the Winslow family, who traveled to America in search of a new world.

“There is nothing sleep-inducing about the chronicle crafted by Ms. Fraser...There is more to the Pilgrims’ story—more to American identity and character—than our Thanksgiving rituals and reveries.” —Wall Street Journal

The voyage of the Mayflower and the founding of Plymouth Colony is one of the seminal events in world history. But the poorly-equipped group of English Puritans who ventured across the Atlantic in the early autumn of 1620 had no sense they would pass into legend. They had eighty casks of butter and two dogs but no cattle for milk, meat, or ploughing. They were ill-prepared for the brutal journey and the new land that few of them could comprehend. But the Mayflower story did not end with these Pilgrims’ arrival on the coast of New England or their first uncertain years as settlers. Rebecca Fraser traces two generations of one ordinary family and their extraordinary response to the challenges of life in America.

Edward Winslow, an apprentice printer, fled England and then Holland for a life of religious freedom and opportunity. Despite the intense physical trials of settlement, he found America exotic, enticing, and endlessly interesting. He built a home and a family, and his remarkable friendship with King Massassoit, Chief of the Wampanoags, is part of the legend of Thanksgiving. Yet, fifty years later, Edward’s son Josiah was commanding the New England militias against Massassoit’s son in King Philip’s War.

The Mayflower is an intensely human portrait of the Winslow family written with the pace of an epic. Rebecca Fraser details domestic life in the seventeenth century, the histories of brave and vocal Puritan women and the contradictions between generations as fathers and sons made the painful decisions which determined their future in America.

Rebecca Fraser, daughter of noted British historian Lady Antonia Fraser, is the author of The Story of Britain, which has been described as "an elegantly written, impressively well-informed single-volume history of how England was governed during the past 2000 years." A reviewer and broadcaster, her previous work also includes a biography of Charlotte Brontë, which examined her life within the framework of contemporary attitudes to women. Rebecca Fraser was President of the Brontë Society for many years.

Praise for The Mayflower:

“There is more to the Pilgrims’ story—more to American identity and character—than our Thanksgiving rituals and reveries.” —Wall Street Journal

“Superbly written and enthralling...The Mayflower reads as though it were historical fiction, with a varied cast of characters and perspectives, fine details, background histories, and a holistic approach.”
—Booklist