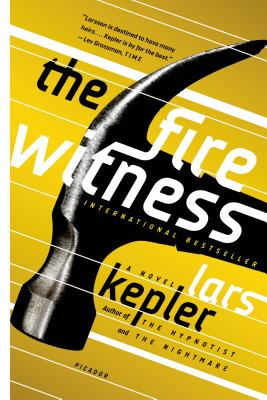 LARS KEPLER, AUTHOR OF THE HYPNOTIST AND THE NIGHTMARE, DELIVERS THE MOST THRILLING JOONA LINNA NOVEL YET IN THE FIRE WITNESS

Flora Hansen makes her living masquerading as a medium. Yet when a young woman is brutally murdered at a rural home for wayward girls, she begins to suffer visions that are all too real. She calls the police, claiming to have seen a ghost, but Detective Inspector Joona Linna is the only one who listens. The case seems obvious to everyone: Another girl fled the home on the night of the killing and left behind a bloody hammer under her pillow. But Hansen insists that the murder weapon was, in fact, a stone. Linna refuses to accept the easy answers, and his search leads him into darker, more violent territory and to a shocking confrontation with a figure from his past.

Lars Kepler is the pseudonym for a literary couple who live in Sweden. Their novels, including The Nightmare and The Hypnotist, have been number-one bestsellers in more than a dozen countries, including Denmark, France, Germany, Holland, Italy, and Spain. They live in Stockholm.

“Larsson is destined to have many heirs...[Kepler] is by far the best.”—Lev Grossman, Time


“One convincing psychotic is about as much as most thriller writers can handle, but Kepler delivers them by the roomful.”—Time

“Kepler’s characters are admirably flawed...It’s a smooth collaboration...with frequent surprises and grace notes amid the carnage. With any luck, we’ll hear more of Lars Kepler.”—Patrick Anderson, The Washington Post