Eye for an Eye: A Dewey Andreas Novel (Mass Market) 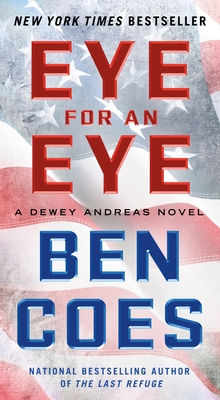 This is book number 4 in the A Dewey Andreas Novel series.

When Dewey Andreas uncovers the identity of a mole embedded at a high level in Israel's Mossad, it triggers a larger, more dangerous plot. The mole was the most important asset of Chinese Intelligence, and the head of China's Ministry of State Security, Fao Bhang, responds to the discovery by placing a kill order on Dewey himself.

Dewey is tracked to Argentina, where he is on vacation with his fiancée, Jessica Tanzer, a U.S. national security advisor. A top-level kill team is sent in quickly and quietly, but their attack fails to take him out. The collateral damage, however, is both horrifying and deeply personal. Now, with Chinese Intelligence on his trail, Dewey goes rogue in his quest for vengeance—no matter the odds or the armies he must fight to get there. A former Ranger and Delta, Dewey is a man of great skills and cunning. His opponent, Fao Bhang, is ruthless and determined, and there is no limit to the assets at his disposal. In this conflict, there are only two possible outcomes…and only one Dewey Andreas… in Eye for an Eye.

This edition of the book is the deluxe, tall rack mass market paperback.

BEN COES is the author of the critically acclaimed Power Down and Coup d’Etat. He is a former speechwriter for the George H .W. Bush White House, worked for Boone Pickens, was a fellow at the JFK School of Government at Harvard, a campaign manager for Mitt Romney’s run for governor in 2002, and is currently a partner in a private equity company out of Boston. He lives in Wellesley, Mass.

“Heart-pounding...Coes is a master.” —Publishers Weekly

“Fiction that's frighteningly plausible and has the feel of authenticity on every page.” —Nashua Inquirer

“Exhilarating...You will want to take a stress test before reading Eye for an Eye. There are any number of suspenseful scenes between the covers.” —Bookreporter.com

“My favorite novel in at least a decade. The writing was inherently masculine, brilliantly crafted.” —Elizabeth Backney, Huffington Post, on THE LAST REFUGE

“The Last Refuge is a winner, and it will keep readers turning the pages.” —The Associated Press

“Another winner from a writer who is a rising star among the ranks of the literary world's most successful authors of the international thriller.” —The Nashua Telegraph on THE LAST REFUGE

“It's a thriller. It's current, and the excitement keeps going…” —The Daily Oklahoman on THE LAST REFUGE

“This exciting sequel to Power Down explores an all-too-plausible conflict...the plot sizzles with action, and the details have an authentic ring that put this thriller a cut above the pack.” —Publishers Weekly on COUP D'ÉTAT

“Will keep you up at night--first with the titillation of a great read, then with dread that Ben's plot might not be all that imaginary. A sumptuous dessert for a thriller reader.” —Brian Haig, author of The Capitol Game, on COUP D'ÉTAT

“Power Down is terrific! With a gripping story, compelling characters, a relentless pace, and nerve-wracking suspense, Power Down is one of the must-read thrillers of the year. Don't miss this debut of novelist Ben Coes and the introduction of Dewey Andreas--you'll devour this one and wait anxiously for their return.” —Vince Flynn, New York Times bestselling author of Pursuit of Honor

“Coes pumps new heat, blood, and flat-out action into a well-worn premise--terrorists are out to break America by attacking its energy resources--in his frighteningly plausible thriller debut.” —Publishers Weekly on POWER DOWN

“I loved Power Down! It's a fresh, exciting thriller and the action scenes are big, vivid and authentic, at times even breathtaking. An impressive debut for Ben Coes. I was blown away.” —David Morrell, New York Times bestselling author of Creepers and creator of Rambo

“A ripping thriller from an exciting new novelist. Power Down kept me glued, turning the pages. Lots of action, a terrific hero, and a slimy villain--thrillers don't get any better.” —Stephen Coonts, New York Times bestselling author of The Disciple

“Power Down marks the emergence of a major new talent in the political thriller genre--no small feat in a field already packed with big names like Vince Flynn, Brad Thor, and David Baldacci. In terms of sheer entertainment value, author Ben Coes and his hero, the unusually but memorably named Dewey Andreas, are easily and immediately competitive with the very best the thriller field has to offer.” —Fiction Addict

“One of those rare, glue-in-your-seat books. Sit down, pick it up, and start reading. You aren't going anywhere for anything until you finish it.” —Bookreporter.com on POWER DOWN