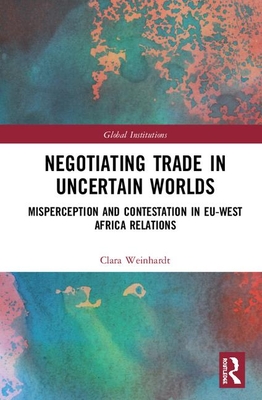 This book shows how a constructivist account of bargaining sheds new light on the emergence of impasse situations in international trade negotiations. It uncovers the subtle ways in which misperceptions - and the problems of overcoming them - complicate negotiations. It brings to the forefront misperceptions and sticky beliefs that complicate trade talks between the Global South and the Global North.

Empirically, the book examines the recent negotiations of Economic Partnership Agreements between the European Union (EU) and West Africa (2002-2014). In doing so, it enriches the study of negotiations of development-oriented trade agreements in the context of a major North-South partnership. By exploring a constructivist perspective on game theory, the author uncovers how the repeated impasse situations followed from the different games both sides expected to be playing. The author shows that such misperceptions endured because they reflected deep-seated normative disagreements not only over the effects of neo-liberal trade reforms, but also over how to structure EU - Africa post-colonial trade relations in the 21st century. Comparing and contrasting both sides' divergent perspectives helps us to see how trade negotiations are never just about economic interests, but also about the (re)negotiation of the values and ideas that structure state interaction. The book draws on a large set of qualitative primary data on EU-West Africa trade negotiations.