The Communist Manifesto: But Tony Hawk Can Keep His Stuff (Paperback) 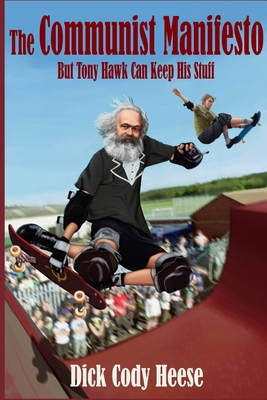 PLEASE READ: Widely loathed parody author Dick Cody Heese is responsible for this poorly-conceived spoof of Marx and Engels' "The Communist Manifesto." Written at the Hooters in Saugus, Massachusetts, in the span of 45 minutes, "The Communist Manifesto: But Tony Hawk Can Keep His Stuff" asks the question: What would change about the Communist Manifesto had Tony Hawk existed during the time of Marx and Engels? Heese's resounding conclusion is that the seminal document in political theory would have included exceptions allowing Tony Hawk to retain his private property in recognition of his gnarly skateboarding abilities and personable demeanor. In an act of parodic historical revisionism, Heese amends the Manifesto to include several sentence-long additions to each of its four parts to make this change on behalf of the original authors. In doing so, he saves Marx and Engels from becoming a casualty of their time given their inability to foresee the bodacious shredding a Californian skateboarder would accomplish nearly a century after their deaths.

Heese has also written several other barely passable parodies, including "The Great Gatsby: But Nick has Scoliosis," "Moby-Kevin," and "Pride and Prejudice: But Mr. Darcy is a Vape God."