The Underground History of American Education, Volume I: An Intimate Investigation Into the Prison of Modern Schooling (Paperback) 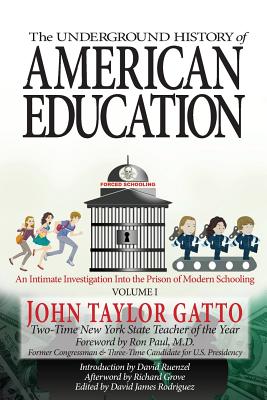 "The World's Most Courageous Teacher" reveals the inner circle secrets of the American school system. The legendary schoolteacher, John Taylor Gatto, invested over 10 years of dedicated research to uncover some of the most alarming ideas and writings by the creators and advocates of mandatory attendance schooling, which show where the system came from and why it was created. He combined these facts with his personal experience as a teacher for 30 years in New York public schools, where he won many awards, including being named State Teacher of the Year twice, and has authored an all-time classic. This book was originally published in 2001, and has been printed a number of times. However, this updated version includes new essays from the author, as well as contributions from Dr. Ron Paul, David Ruenzel, and Richard Grove. This is the first of a 3 book volume which will help the reader gain a solid understanding about the American school organization and many of the hidden, yet powerful parts. In this first of set, Mr. Gatto's humble yet bold personality, mixed with humor and class, makes it an enjoyable read, despite the importance and implications of the subject. Mr. Gatto says, "It's time to take our schools back. If they mean to have a war, let it begin now.

John Taylor Gatto is a renowned speaker having lectured about education in all 50 states and 9 countries. He taught for 30 years in public schools and was twice awarded the New York State Teacher of the Year. Mr. Gatto resigned from school teaching in the op-ed pages of the Wall Street Journal because he no longer wanted "to hurt kids to make a living." Demonstrating unsurpassed bravery in his condemnation of government-monopoly compulsory schooling, he is known as "The World's Most Courageous Teacher." He is the author of A Different Kind of Teacher, The Exhausted School, Dumbing Us Down, and Weapons of Mass Instruction, having sold over 200,000 copies, and co-creator of the epic 5-hour DVD interview, The Ultimate History Lesson: A Weekend with John Taylor Gatto.