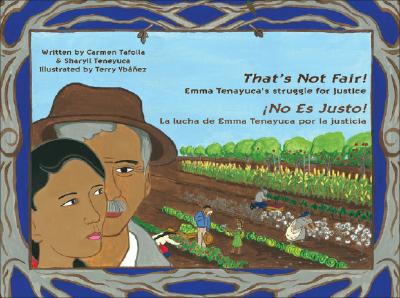 A vivid depiction of the early injustices encountered by a young Mexican-American girl in San Antonio in the 1920's, this book tells the true story of Emma Tenayuca. Emma learns to care deeply about poverty and hunger during a time when many Mexican Americans were starving to death and working unreasonably long hours at slave wages in the city's pecan-shelling factories. Through astute perception, caring, and personal action, Emma begins to get involved, and eventually, at the age of 21, leads 12,000 workers in the first significant historical action in the Mexican-American struggle for justice. Emma Tenayuca's story serves as a model for young and old alike about courage, compassion, and the role everyone can play in making the world more fair.

Carmen Tafolla is one of the most anthologized of all Latina poets, with poems for both adults and children appearing in more than 200 anthologies. She is the author of the Bluebonnet Award-nominated Baby Coyote and the Old Woman. Sharyll Teneyuca is a social justice lawyer and the niece of Emma Tenayuca. Terry Ybáñez is the illustrator of Christmas Tree: El Árbol de Navidad and Hairs/Pelitos. They all live in San Antonio, Texas.

"This inspirational story, illustrated with brightly colored, touching artwork, will teach readers that one determined person can make the world a better place. Highly recommended for all schools and public libraries." —Críticas, starred review

"Tells of Ms. Tenayuca's life, not as an organizer, orator, or leader but as a girl whose sharp mind and compassion for others sows the seeds of activism."  —National Catholic Reporter

"Carmen Tafolla is a pioneer of Chicana literature and a unique Southwestern voice. Her poems and stories will teach you as much as touch your heart."  —Ana Castillo, author, So Far from God

"That’s Not Fair! is a coming-of-age story of a child who is moved to action by the poverty and injustice she witnesses all around her . . . . Emma the child, learning from her gentle grandfather, matured into Emma the organizer who led the mostly Mexican, mostly women pecan shellers . . . is a story that will resonate with young children . . . . An important book about a child’s confronting injustice and growing up to make a difference, That’s Not Fair! Emma Tenayuca’s struggle for justice / ¡No Es Justo! La lucha de Emma Tenayuca por la justicia is highly recommended." —Beverly Slapin, decoloresreviews.blogspot.com