Death of a Scriptwriter (A Hamish Macbeth Mystery #14) (Hardcover) 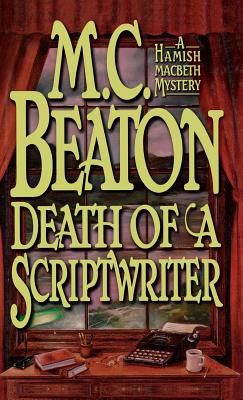 Death of a Scriptwriter (A Hamish Macbeth Mystery #14) (Hardcover)

This is book number 14 in the A Hamish Macbeth Mystery series.

From the author of the Agatha Raisin television series...DEATH OF A SCRIPTWRITER: A Hamish Macbeth Mystery HOLLYWOOD IN THE HIGHLANDS
With the lovely Priscilla Halburton-Smythe away in London, Lochdubh Constable Hamish Macbeth pines for company during the long Scottish winter. He gets his wish -- and more -- when a troupe of flashy, urbane filmmakers clamors into the nearby town of Drim. Before long bedlam erupts around their make-believe mystery ...and culminates in the sudden appearance of one very real corpse.
The initial suspect in the killing is one Patricia Martyn-Broyd, the aging mystery writer furious that her musty old cozies are getting a risque face-lift in their TV reincarnation. Yet, going behind the scenes, Hamish soon finds a town full of locals bitten by the movie bug and a cast of quarreling show business types, all harboring their own secrets, lies, and hidden agendas. And as the culprit strikes again, Hamish must quickly find the right killer -- or script the wrong finale to a show gone murderously awry.
M. C. Beaton has won international acclaim for her New York Times bestselling Hamish Macbeth mysteries. The BBC has aired 24 episodes based on the series. Beaton is also the author of the bestselling Agatha Raisin series, which will air as an eight-episode dramatic series on Sky1, starring Ashley Jensen. She lives in the Cotswolds with her husband. For more information, you can visit MCBeaton.com.