Modern Romania: The End of Communism, the Failure of Democratic Reform, and the Theft of a Nation (Paperback) 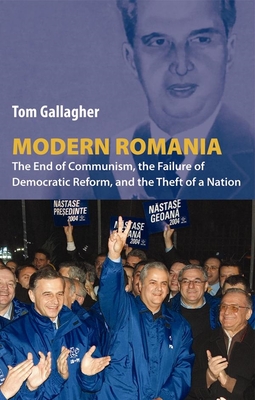 Since the 1989 fall of Communism in Eastern Europe, Romania, arguably the most regimented of states in the Soviet bloc, has struggled with the transition from totalitarian state to democratic nation. In this insightful examination of modern Romania, Tom Gallagher provides an overview of Romania's unique political and social history, focusing on both its national identity as well as the legacy of Soviet rule. Gallagher provides an in-depth look at Romania since 1989, focusing on the government's attempts at economic reform, engagement with democracy, problems with corruption among the ruling elite, as well as the weakness of civil society and the resilience of implacable expressions of nationalism. Ultimately, Gallagher argues that thus far democracy has essentially failed in Romania. In fact, he warns that Romania is on its way to becoming one of the most unequal states in Europe and quite possibly a future trouble-spot unless efforts to resume much-needed reforms are undertaken.