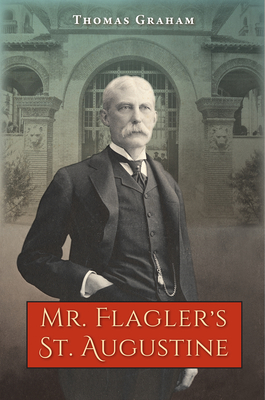 In the late 1800s, Henry Morrison Flagler walked away from Standard Oil, leaving the enormously successful company in the hands of John D. Rockefeller while he headed to Florida to pursue other interests. Flagler's new venture would lead him to completely restructure the sleepy town of St. Augustine and transform Florida's entire east coast.

This monumental biography tells the story of how one of the wealthiest men in America spared no expense to turn the country's "Oldest City" into a highly desirable vacation destination for the rich. Upon arrival, Flagler found accommodations in St. Augustine to be inferior, so he set out to build the opulent Ponce de Leon Hotel, and thus began his endeavor to attract wealthy travelers to the small southern city. He funded hospitals and churches and improved streets and parks. He constructed railroads in remote areas where men feared to tread and erected palatial hotels on swampland. The rich and famous flocked to Flagler's invented paradise. And he had the vision to stretch his new railroad southward, establishing hotels and accommodations along the way.

In tracing Flagler's second career, Thomas Graham reveals much about the inner life of the former oil magnate and the demons that drove him to expand a coastal empire that eventually encompassed Palm Beach, Miami, Key West, and finally Nassau. Graham also gives voice to the individuals that history has forgotten: the women who wrote tourist books, the artists who decorated the hotels, the black servants who waited tables, and the journalists who penned society columns for the newspapers.

Arguably no man did more to make over a city--or a state--than Flagler. Almost single-handedly, he transformed Florida from a remote frontier into the winter playground of America's elite. Filled with fascinating details that bring the Gilded Age to life, Mr. Flagler's St. Augustine provides an authoritative look at an intriguing man and a captivating time in American history.

Thomas Graham is professor emeritus of history at Flagler College. He is the author of several books including Flagler's St. Augustine Hotels and The Awakening of St. Augustine.