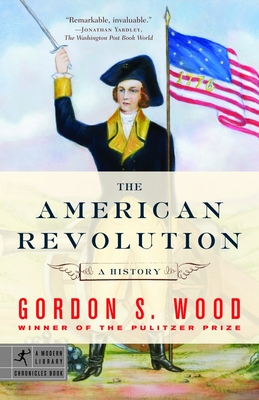 “An elegant synthesis done by the leading scholar in the field, which nicely integrates the work on the American Revolution over the last three decades but never loses contact with the older, classic questions that we have been arguing about for over two hundred years.”—Joseph J. Ellis, author of Founding Brothers

A magnificent account of the revolution in arms and consciousness that gave birth to the American republic.

When Abraham Lincoln sought to define the significance of the United States, he naturally looked back to the American Revolution. He knew that the Revolution not only had legally created the United States, but also had produced all of the great hopes and values of the American people. Our noblest ideals and aspirations-our commitments to freedom, constitutionalism, the well-being of ordinary people, and equality-came out of the Revolutionary era. Lincoln saw as well that the Revolution had convinced Americans that they were a special people with a special destiny to lead the world toward liberty. The Revolution, in short, gave birth to whatever sense of nationhood and national purpose Americans have had.

No doubt the story is a dramatic one: Thirteen insignificant colonies three thousand miles from the centers of Western civilization fought off British rule to become, in fewer than three decades, a huge, sprawling, rambunctious republic of nearly four million citizens. But the history of the American Revolution, like the history of the nation as a whole, ought not to be viewed simply as a story of right and wrong from which moral lessons are to be drawn. It is a complicated and at times ironic story that needs to be explained and understood, not blindly celebrated or condemned. How did this great revolution come about? What was its character? What were its consequences? These are the questions this short history seeks to answer. That it succeeds in such a profound and enthralling way is a tribute to Gordon Wood’s mastery of his subject, and of the historian’s craft.
Gordon S. Wood received his B.A. from Tufts University and his Ph.D. from Harvard University. Since 1969 he has been at Brown University, where he is a professor of history. In 1970 his book The Creation of the American Republic 1776—1787 was nominated for the National Book Award and received the Bancroft and John H. Dunning prizes. In 1993 he won the Pulitzer Prize for The Radicalism of the American Revolution. He lives in Providence, Rhode Island.

“Wood is the preeminent historian of the Revolution. . . . Here . . . he manages to boil down to its essence this crucial period in the country’s history without in the process reducing it to History Lite. . . . His account of the emergence and development of rank-and-file political opinion is especially provocative and informative, but then so is just about everything else in this remarkable, invaluable book.”—The Washington Post Book World

“An elegant, concise and lucid summary of the Revolution’s origins, the war itself, and the social and political changes wrought by the struggle for American independence.”—The Wall Street Journal

“This slim book tells a big story: one that invites the reader to contemplate the relationships between liberty, power, rights and the unpredictable outcomes of human action.”—Los Angeles Times Book Review

“An elegant synthesis done by the leading scholar in the field, which nicely integrates the work on the American Revolution over the last three decades but never loses contact with the older, classic questions that we have been arguing about for over two hundred years.”—Joseph J. Ellis, author of Founding Brothers