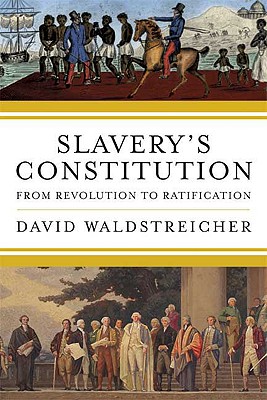 By David Waldstreicher
Email or call for price
Special Order

Taking on decades of received wisdom, David Waldstreicher has written the first book to recognize slavery’s place at the heart of the U.S. Constitution. Famously, the Constitution never mentions slavery. And yet, of its eighty-four clauses, six were directly concerned with slaves and the interests of their owners. Five other clauses had implications for slavery that were considered and debated by the delegates to the 1787 Constitutional Convention and the citizens of the states during ratification. This “peculiar institution” was not a moral blind spot for America’s otherwise enlightened framers, nor was it the expression of a mere economic interest. Slavery was as important to the making of the Constitution as the Constitution was to the survival of slavery. By tracing slavery from before the revolution, through the Constitution’s framing, and into the public debate that followed, Waldstreicher rigorously shows that slavery was not only actively discussed behind the closed and locked doors of the Constitutional Convention, but that it was also deftly woven into the Constitution itself. For one thing, slavery was central to the American economy, and since the document set the stage for a national economy, the Constitution could not avoid having implications for slavery. Even more, since the government defined sovereignty over individuals, as well as property in them, discussion of sovereignty led directly to debate over slavery’s place in the new republic. Finding meaning in silences that have long been ignored, Slavery’s Constitution is a vital and sorely needed contribution to the conversation about the origins, impact, and meaning of our nation’s founding document.

David Waldstreicher is a professor of history at Temple University and is the author of "Runaway America" (H&W, 2004) and "In the Midst of Perpetual Fetes."

“Was the American Constitution as originally ratified a proslavery document? In this unflinching, deeply intelligent, and persuasive work, David Waldstreicher answers yes. Sure to spark interest and debate, Slavery’s Constitution is an immensely engaging and valuable contribution to the literature on the founding of the American nation.” —Annette Gordon-Reed “Succinct and shrewd, David Waldstreicher’s Slavery’s Constitution enables us to understand a central element of American political practice that the founders sought to obscure.” —Linda K. Kerber “David Waldstreicher’s intriguing new book brilliantly shows the founding fathers’ republican constitution to be, in important part, central to their many evasions of slavery’s antirepublican nature.” —William W. Freehling “With as light a touch as its hard truths permit, Slavery’s Constitution explains the deep, complex, and pervasive entanglement that ultimately doomed the United States to civil war.” —Robin L. Einhorn “David Waldstreicher’s brilliant little book sets the terms of debate for all further discussion of slavery and the Constitution.” —James Oakes “Highly readable and provocative in conception.” —Thomas J. Davis, Library Journal  “A closely argued critique that exposes the deadly implications of the Constitution’s careful euphemisms about slavery.” —Kirkus Reviews After they won the revolution, how did the framers of our government deal with slavery without becoming hypocrites? They didn’t—and instead wove slavery into their Constitution to ensure its perpetuation, historian David Waldstreicher persuasively argues in his slender, provocative book.” —Cameron McWhirter, The Atlanta Journal-Constitution “Waldstreicher’s interpretation is likely to be controversial, but then, he is no stranger to examining the tarnish on American icons. In Runaway America, he questioned the anti-slavery credentials of Benjamin Franklin. Little wonder that he concludes here that ‘Slavery’s Constitution,’ not slavery itself,caused the Civil War.” —Roger K. Miller, Chicago Sun-Times “An important contribution.” —Claude R. Marx, The Boston Globe “In this important new book, [Waldstreicher] writes that while the U.S. Constitution never mentions slavery, ‘slavery is all over the document.’ ” —Steve Goddard, Historywire.com“An interesting exploration of the influence of slavery on early American politics and life.” —Curled Up with a Good Book “In a succinct but carefully reasoned study, Temple University history professor David Waldstreicher shows how slave state delegates to the Constitutional Convention leveraged the issue to their advantage, and how ardent federalists from the North, many of them opposed to slavery, came to a consensus of silence over the Constitution’s role in countenancing slavery.” —David Luhrssen, Shepherd Express “Slavery’s Constitution will certainly set the terms of the debate over the institution of human bondage and the 1787 Constitution for years to come.” —Erik J. Chaput, The Providence Journal