First to Fly: North Carolina and the Beginnings of Aviation (Paperback) 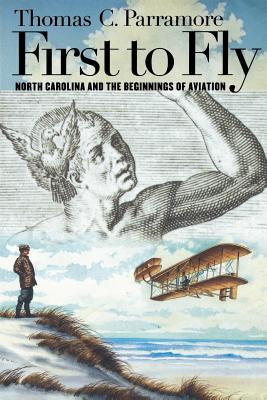 First to Fly: North Carolina and the Beginnings of Aviation (Paperback)


Usually Ships in 3-7 Days
A remarkable story filled with dreamers, inventors, scoundrels, and pioneering pilots, First to Fly recounts North Carolina's significant role in the early history of aviation. Beginning well before the Wright brothers' first powered flight at Kill Devil Hill in 1903, North Carolinians labored at the cutting edge of aviation technology from the late 1800s through World War I.

North Carolina was a launching ground for real and imaginary ballooning adventures as early as 1789. Powered experiments, including what seems to have been America's first airplane, gained momentum in the late nineteenth century. Tar Heel mechanics and inventors also built a dirigible and, arguably, the world's first successful helicopter.

Tom Parramore's account of the Wrights' experiments and turn-of-the-century Dare County provides new information on the crucial role of Outer Bankers in ensuring the Wrights' success. Without this aid, he argues, it is unlikely that the miracle of flight would have first been achieved in 1903--or in America. After 1903, growth in the new aviation industry, spurred by World War I, outpaced North Carolina's ability to play a major role. But the state produced some of the most notable airmen and women of the era, furnishing hundreds of pilots to the war effort.

"While First to Fly will certainly appeal to aviation buffs and devotees of North Carolina history, it is also a fascinating tale of American ingenuity, bravery, and determination.--American History

"A delight of Thomas C. Parramore's First to Fly is its . . . dependence on character and tale to offer engaging history. . . . Parramore has discovered a buried North Carolina aviation legacy.--Clyde Edgerton, Raleigh News & Observer

A century after the Wright brothers' first powered flight at Kill Devil Hill in 1903, Thomas Parramore recounts the Tar Heel State's significant role in the early history of aviation from the late 1800s through World War I. Recovering the forgotten stories of North Carolinians' many early adventures, experiments, failures, and triumphs in aviation, he traces how dreams of flight became a reality in the state around the turn of the twentieth century.