Full Service: My Adventures in Hollywood and the Secret Sex Live of the Stars (Paperback) 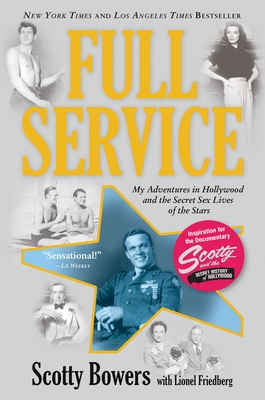 Full Service: My Adventures in Hollywood and the Secret Sex Live of the Stars (Paperback)

By Scotty Bowers, Lionel Friedberg (With)


Usually Ships in 3-7 Days
Now the subject of the hit documentary Scotty and the Secret History of Hollywood, praised by Vanity Fair as "full of revelations" and Entertainment Weekly as "deliciously salacious," Full Service is the remarkable true story of Scotty Bowers, the "gentleman hustler," during the heyday of classic Hollywood.

Newly discharged from the Marines after World War II, Bowers arrived in Hollywood in 1946. Young, charismatic, and strikingly handsome, he quickly caught the eye of many of the town's stars and starlets. He began sleeping with some himself, and connecting others with his coterie of young, attractive, and sexually free-spirited friends. His own lovers included Edith Piaf, Spencer Tracy, Vivien Leigh, Cary Grant, and the abdicated King of England Edward VIII, and he arranged tricks or otherwise crossed paths with Tennessee Williams, Charles Laughton, Vincent Price, Katharine Hepburn, Rita Hayworth, Errol Flynn, Gloria Swanson, No l Coward, Mae West, James Dean, Rock Hudson and J. Edgar Hoover, to name but a few.

Full Service is not only a fascinating chronicle of Hollywood's sexual underground, but also exposes the hypocrisy of the major studios, who used actors to propagate a myth of a conformist, sexually innocent America knowing full well that their stars' personal lives differed dramatically from this family-friendly mold. As revelation-filled as Hollywood Babylon, Full Service provides a lost chapter in the history of the sexual revolution and is a testament to a man who provided sex, support, and affection to countless people.

Scotty Bowers, now 95, still works as a bartender at private functions in Hollywood.Lionel Friedberg is an Emmy-winning producer, director and professional writer.